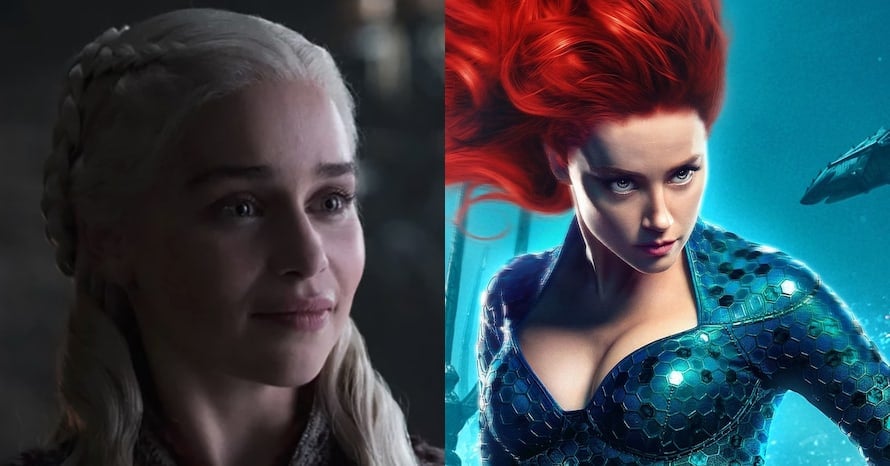 Following Johnny Depp’s exit from Fantastic Beasts 3 after his legal issues with ex-wife Amber Heard, many DC Extended Universe fans have called for the star to also leave her role as Mera in Aquaman 2. The actress has previously confirmed that she’ll be back for the DCEU sequel, once again appearing opposite Jason Momoa in the James Wan-directed adventure. However, Emilia Clarke has constantly been suggested as the perfect replacement for Aquaman 2.

This concept design from Instagram user ‘valentinromeroart’ shows Emilia Clarke with the hexagonal suit for the Mera role and the Game of Thrones star also wears the underwater crown. The design also adds a purple color to the suit to give Clarke a different costume for Aquaman 2. For now, Amber Heard will remain in her role for the DCEU, but it would be very easy for Emilia Clarke to slip into the character if Heard does leave. Check out the artwork below.

Should Amber Heard leave her role behind? Would you like to see Emilia Clarke as Mera in the DCEU? What do you want from Aquaman 2? Let us know in the comments section!

From Warner Bros. Pictures and director James Wan comes an acition-packed adventure that spans the vast, visually breathtaking underwater world of the seven seas, “Aquaman,” starring Jason Momoa in the title role. The film reveals the origin story of half-human, half-Atlantean Arthur Curry and takes him on the journey of his lifetime—one that will not only force him to face who he really is, but to discover if he is worthy of who he was born to be… a king.

Aquaman is available on Digital HD, 4K UHD Combo Pack, Blu-ray Combo Pack, and DVD. Stay tuned for all the latest regarding Emilia Clarke, Amber Heard, Mera and the future of the DCEU, be sure to subscribe to Heroic Hollywood’s YouTube channel for more video content!