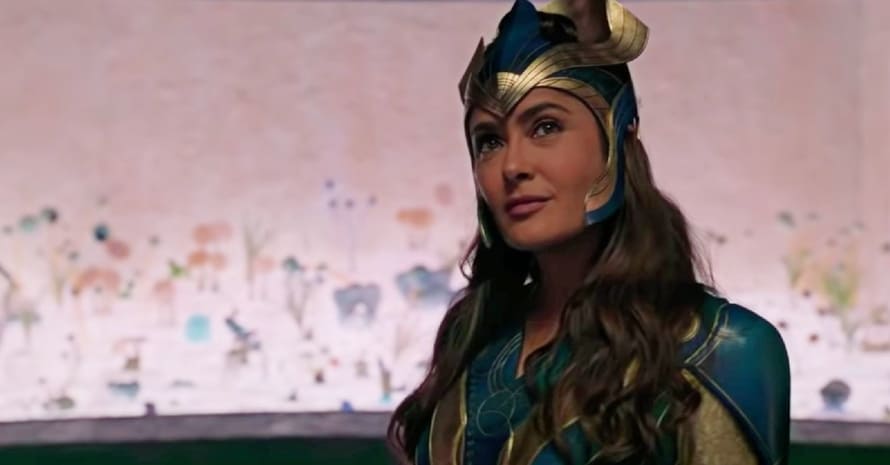 Marvel Studios’ new film Eternals hit theaters this weekend to perhaps the most mixed reception in the entire MCU franchise thus far. Regardless of how the film was received, fans were still excited to check out the film’s ensemble of characters that included acclaimed performers including Angelina Jolie and Salma Hayek. Salma Hayek plays Ajak, the leader of the group. She serves as a maternal figure to the rest of the team, and is held in high regard.

SPOILERS FOR ETERNALS DOWN BELOW.

Salma Hayek confirmed in an interview with Smallzy’s Celebrity Small Talk that she signed a multiple-picture deal, hinting that she could appear in more MCU films in the future:

“I did sign multiple movie deals! It was kind of fun being part of this… secret society that you have to protect so fearlessly!”

The revelation that Salma Hayek signed such a deal to appear in multiple MCU films is interesting because her character Ajak gets killed off in the first act of the film, serving as the emotional catalyst that reunites the Eternals together to face off against the Deviants. Whether or not flashbacks and/or the Multiverse will bring Ajak back into future films remains a mystery, if Marvel Studios opts to continue telling more of Ajak’s story.

Here is the synopsis for Salma Hayek’s Eternals:

Eternals is now in theaters. Stay tuned for all the latest news surrounding the film, Salma Hayek’s role, and the future of the MCU, and be sure to subscribe to Heroic Hollywood’s YouTube channel for more original video content.