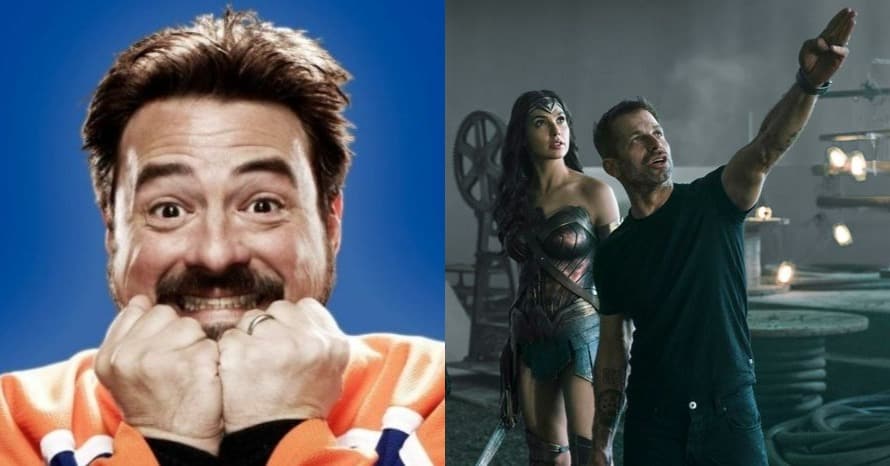 With only a few months to go until Justice League finally debuts on HBO Max, there’s been much speculation over the possibility of Zack Snyder continuing the story he originally wanted to explore before leaving the project. Snyder recently confirmed that he’d love to work with Jim Lee on telling part of that tale in a comic book which would include the Joker stealing a Motherbox, while DC fans have begun an online campaign to see more from the director, using #RestoreTheSnyderVerse on Twitter and Instagram. But on the most recent episode of the Fatman Beyond podcast, director Kevin Smith claimed that the film has a “weird” ending

During the podcast, Kevin Smith explained that he’s learned from “a friend” that Justice League doesn’t end like the storytelling cul-de-sac Warner Bros. executives previously claimed it was. According to Smith, the weird finale makes room for future installments in Zack Snyder’s timeline of movies. Whether that would be in comic book form, animation or live-action is obviously up to Warner Bros. and the overall success of the Snyder cut. Take a look at Kevin Smith talking about the film below.

“I happen to know that the ending that he’s got for the Snyder Cut is very not a cul-de-sac… it takes it to a weird neighborhood, but it’s not a cul-de-sac. You can keep f***ing going with the story based on what I’ve heard from a friend.”

What do you make of Kevin Smith’s Justice League news? Do you think Warner Bros. will let Zack Snyder continue telling stories after his cut is released? Sound-off in the comments below!

Zack Snyder’s Justice League Cut is set to hit HBO Max in March 2021. Stay tuned for the latest news regarding Kevin Smith and the future of the DC Extended Universe and make sure to subscribe to our YouTube channel for more content!