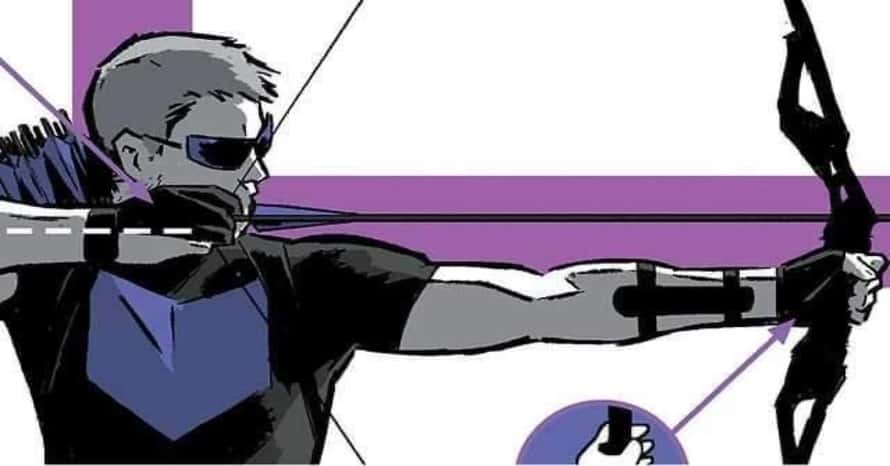 Jeremy Renner is getting a new look for his upcoming Hawkeye series on Disney+.

Jeremy Renner’s Hawkeye series has officially wrapped but that doesn’t mean we’re low on content from the project. In a newly surfaced photo we can see Renner suited up as Hawkeye in a very new costume. The costume features a purple chest insignia that’s reminiscent of Clint Barton’s look during Matt Fraction’s comic book run of the character.

You can check out Jeremy Renner in his new Hawkeye suit below.

What do you think of Jeremy Renner’s new suit? Are you excited to see Hawkeye on Disney+? Share your thoughts in the comments section below!
The upcoming Jeremy Renner series previously added Amber Finlayson and Katie Ellwood to its director list. Amber Finlayson and Katie Ellwood, also known as Bert and Bertie, are best known for helming Amazon’s coming of age comedy, Troop Zero. In addition, the series has also added Rhys Thomas, whose resume includes directing episodes Saturday Night Live and Comrade Detective. It is currently unknown how many episodes these three will direct.

Full details on Hawkeye are currently under wraps, though the Disney Plus series will follow Jeremy Renner’s Clint Barton as he prepares to pass the mantle to Kate Bishop. In the comics, Kate Bishop is the third character and first woman to assume the Hawkeye name.

Jeremy Renner and Hailee Steinfeld’s Hawkeye is just one of the many projects Marvel Studios is developing for Disney Plus. These projects include The Falcon and the Winter Soldier, WandaVision, Loki, What If…?, Hawkeye, Ms. Marvel, Moon Knight, and She-Hulk.

Hawkeye is currently scheduled to premiere on Disney Plus in Fall 2021. Stay tuned for the latest news regarding the future of the Marvel Cinematic Universe on Disney Plus, and be sure to subscribe to Heroic Hollywood’s YouTube channel for more content!