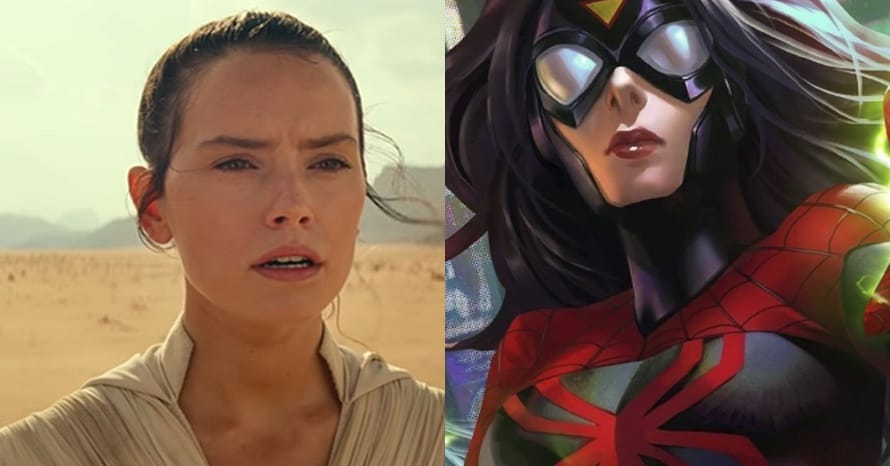 Star Wars lead Daisy Ridley recently touched on the rumors that she’s signed on for Spider-Woman and if she’d join the MCU.

With Olivia Wilde seemingly set to direct a Spider-Woman movie for Sony, many fans have wondered who could play Jessica Drew in live-action. Star Wars lead Daisy Ridley recently opened up about how she said the role sounded great which led to rumors swirling that she’d taken the role. The star was most recently seen in Chaos Walking opposite Spider-Man star Tom Holland, and many fans would clearly like to see Ridley team up with Peter Parker as Spider-Woman.

Daisy Ridley was speaking to ComicBookMovie.com when the star was asked about Spider-Woman, she specifically pointed out that she isn’t the frontrunner for the role but she thinks the situation is quite funny that her words were taken out of context. Ridley also went on to say that if a role came up in the Marvel Cinematic Universe that appealed to her that she’d definitely be interested in suiting up as a superhero. Take a look below.

“Well, it’s funny because someone asked me off the cuff about the Spider-Woman rumours recently, and I went, ‘Oh, that sounds great.’ Apparently, I’ve now declared myself a frontrunner to be Spider-Woman which isn’t true! It’s funny because I don’t really choose things…I [didn’t] set out to do another ‘big film.’ I just read the script, loved it, and loved the idea of it. Basically, should something come along and be great, of course I’d be open to anything. I just finished WandaVision. What they did with it is so amazing and different and interesting. To be particularly in that world, which is ever shifting and reimagining itself would be very exciting.”

What do you make of Daisy Ridley’s comments? Would you like to see her play Spider-Woman for Olivia Wilde’s movie? Do you think she should join the MCU? Sound-off in the comments below!

Here is the official synopsis for Sony’s next Marvel film, Morbius:

One of Marvel’s most compelling and conflicted characters comes to the big screen as Oscar winner Jared Leto transforms into the enigmatic antihero, Michael Morbius. Dangerously ill with a rare blood disorder, and determined to save others suffering his same fate, Dr. Morbius attempts a desperate gamble. What at first appears to be a radical success soon reveals itself to be a remedy potentially worse than the disease.

Stay tuned for all the latest news on Daisy Ridley Spider-Woman and the MCU, and be sure to subscribe to Heroic Hollywood’s YouTube channel for more original video content!