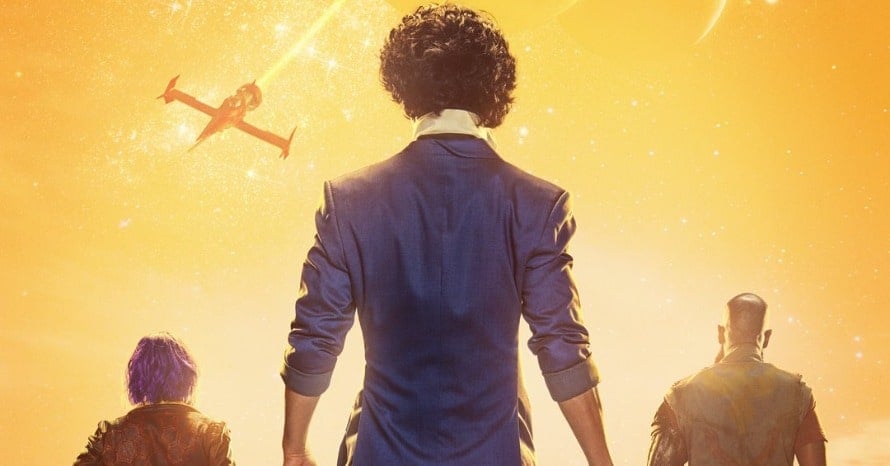 The upcoming live-action adaptation of the anime Cowboy Bebop is set to hit Netflix later this month, and new glimpses at the series showcase some of the exciting action and adventures that Spike Spiegel (John Cho), Jet Black (Mustafa Shakir) and Faye Valentine (Daniella Pineda) embark on.

Netflix unveiled a brand new poster for the series, showcasing John Cho, Mustafa Shakir and Daniella Pineda ready for action. You can check it out down below:

Just from the aesthetic choices, the title sequence and the jazz music, Netflix’s Cowboy Bebop adaptation looks to pay tribute to the original anime as best as it can. Often times, live-action adaptations of popular anime series have fallen short for both critics and fans, but here’s hoping that with a talent like John Cho as Spike Spiegel, this new adaptation will be something that will satisfy fans.

Here is the synopsis for Netflix’s Cowboy Bebop:

“Cowboy Bebop is an action-packed space Western about three bounty hunters, aka cowboys, all trying to outrun the past. As different as they are deadly, Spike Spiegel (John Cho), Jet Black (Mustafa Shakir), and Faye Valentine (Daniella Pineda) form a scrappy, snarky crew ready to hunt down the solar system’s most dangerous criminals — for the right price. But they can only kick and quip their way out of so many scuffles before their pasts finally catch up with them.”

Cowboy Bepop is written by Christoper Yost and stars John Cho, Mustafa Shakir, Daniella Pineda, Alex Hassell, Elena Satine, and Rachel House. The series debuts on November 19. Stay tuned for all the latest news regarding John Cho and the upcoming series on Netflix, and be sure to subscribe to Heroic Hollywood’s YouTube channel for more original video content!