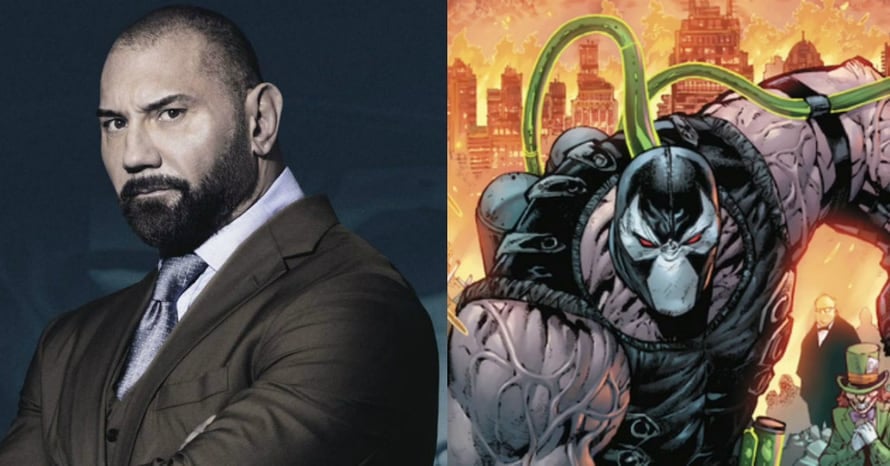 Dave Bautista is no stranger to speaking his mind and talking about what he truly wants. One of his dream roles (and one of our dream castings) is the DC Comics villain Bane, arguably Batman’s most physically-daunting foe. Unfortunately, Bautista traded in Bane’s mask for Drax’s no sense of humor for the Avengers franchise. In a recent chat with Collider to discuss his upcoming role in Zack Snyder’s Army of the Dead, Bautista talked about why he still wants to play Bane, while also discussing what he would have done differently than Tom Hardy, who portrayed the beast in 2012’s The Dark Knight Rises.

“There are certain characters I’ve latched on to over the past 10, 20 years, and Bane was one of them. No discredit to Tom Hardy’s version of Bane, I love that performance, I loved that film. I’d just love a crack at it. I think I could bring an interesting twist to it and I think I could do the character justice. Not only in performance, but also in physicality. I’d love that role where I’d have to go back up to 320 pounds just to play this character, like that it would happen. I could…play Bane in a way that’s not only menacing and ominous but also freakishly intelligent. Bane would be the type of character that’s so menacing and so terrifying and so intelligent, he would hardly ever raise his voice.”

The Avengers star is absolutely spot on about bringing on a whole different level of physical presence to the character. As a former wrestler, Dave Bautista has what it takes to elevate the character to new heights, even at the age of 52. While Bautista could easily fit into the role physically, he also discussed the physiological aspects of the character, relating Bane to his Spectre villain Mr. Hinx.

“Mr. Hinx, he was so terrifying, his demeanor hardly ever changed. He was very happy to be beating the hell out of someone. He wasn’t super overly aggressive, he was just so confident in what he was doing. That’s the way I perceive Bane to be as well. He would not only be physically superior, he’d be mentally superior. I love the idea of the challenge of playing that character. I like when you can play a brute who’s not your predictable brute. Any big muscular guy can play the guy who is screaming, and growling, and yelling. But if you play a guy who is not only physically menacing but also soft-spoken, and even more terrifying when he’s speaking to you softly with a smile on his face, then that is a villain.”

Do you think Dave Bautista could make a good Bane? Comment below and let us know!

Dave Bautista last appeared as Drax the Destroyer in Avengers: Endgame. Here is the synopsis for the film:

Avengers: Endgame is now available on Digital HD, 4K Ultra HD, Blu-ray, and DVD. Stay tuned to Heroic Hollywood for the latest news on Robert Downey Jr. as Tony Stark and be sure to subscribe to our YouTube channel for more content in the future!