Geeks WorldWide is relatively new to the scoop game but they’ve been spot on about a few different stories lately, including Swamp-Thing’s shock cancellation. Now, the site has shed some light on who they claim will be the four lead villains in The Batman courtesy of some casting breakdowns.

There have been rumblings for a while about as many as half a dozen bad guys making an appeareance in the Matt Reeves helmed DC Comics adaptation and now that Robert Pattinson has been cast as the Dark Knight, it seems as if the filmmaker is starting to turn his attentions towards Batman’s Rogues Gallery and there are definitely some surprises here.

So, with four big bads seemingly “confirmed” to make an appearance in The Batman, you’ll find details on each of the movie’s lead villains by clicking on the “View List” button below. 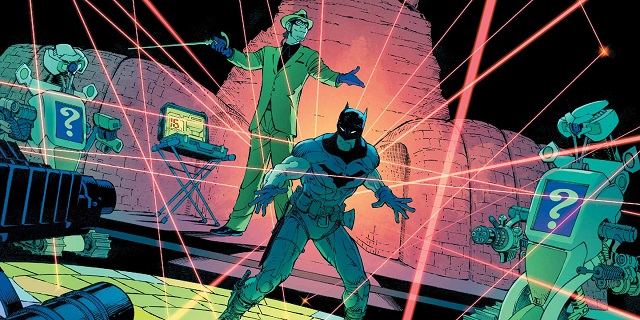 According to the site, The Riddler will more than likely be The Batman‘s lead villain.

That’s definitely a surprise but no bad thing, especially as fans have been hoping to see a comic accurate take on the character for years now. Reeves is said to be looking for a male actor of any ethnicity between the ages of 30 and 40.

The casting call describes him as “a criminal mastermind in Gotham City who takes delight in incorporating riddles and puzzles into his schemes, leaving them as clues for the authorities to solve.” Sounds good, right? There’s more… 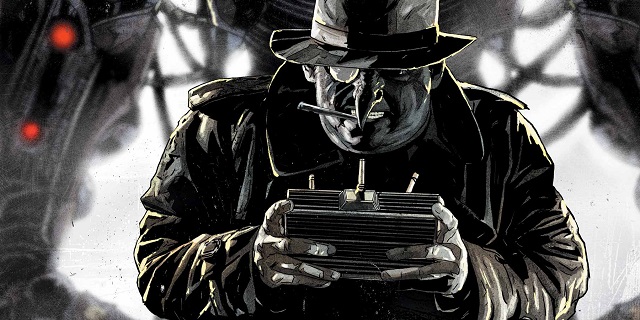 There’s been talk of The Penguin coming to The Batman for quite some time but this “Gotham City mobster” won’t be quite as drastically reinvented as the version we saw in FOX’s Gotham.

Apparently, he’s a “short, obese man with a long nose, and he uses high-tech umbrellas as weapons.” That sounds very comic accurate and Reeves is reportedly looking for another male actor of any ethnicity, this time between the ages of 20 and 40. Who knows if Josh Gad stands a chance! 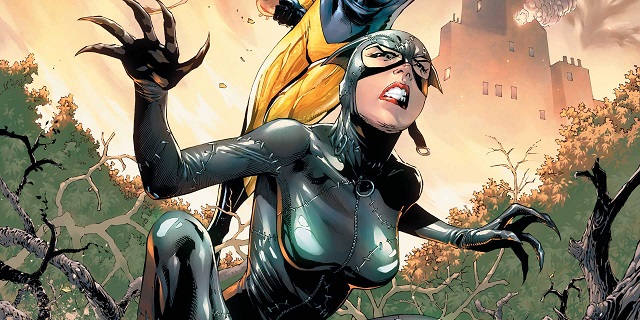 Another character who has been linked to this movie for a while, it sounds like Selina Kyle is definitely coming to The Batman. Described as a “Gotham City burglar” who “wears a tight one piece outfit and uses a bullwhip for a weapon,” Reeves wants an actress of any ethnicity between the ages of 20 and 30.

That may be a generic description just being used for these casting calls but fingers crossed it’s accurate because the realistic interpretation of Selina Kyle we got in The Dark Knight Rises disappointed many fans. Either way, Reeves clearly wants a fairly young star to take on the role here. 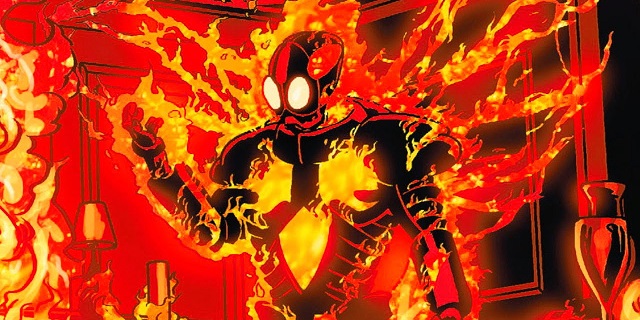 Here’s another surprise for you.

Despite very much a C-List Batman villain, Firefly will be making his proper big screen debut in this DC Comics adaptation as an apparent secondary villain. Called “a professional arsonist known as the ‘Firefly,'” it’s said that he “attempts to burn all the places that he lacked the privilege to go as an orphan child.”

Reeves is said to be looking for a male actor of any ethnicity between the ages of 20 and 30 so that’s yet another pretty wide net. Seeing Batman battle this guy promises to be great fun, though.

Continue reading below for a recap of
everything we know about The Batman! 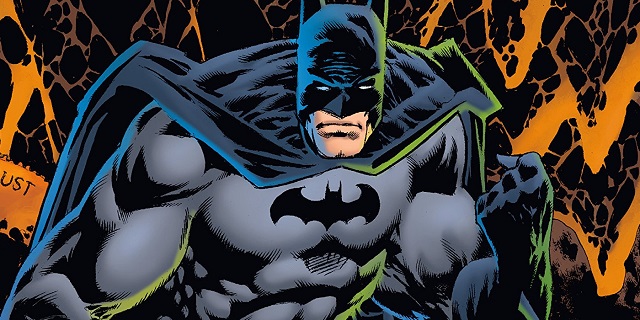 It wouldn’t really make much sense for Robert Pattinson to “replace” Ben Affleck’s version of Batman given their age difference, and we’ve heard from a number of reliable sources that Reeves wants to focus on a younger, not quite as experienced version of the hero. As a result, rumours have done the rounds claiming that this adventure is actually going to be set during the 1990s.

This “period” setting for The Batman would free Reeves from having to link to what’s come before and the rest of the DCEU, but fans will obviously be hopeful for some connections.

Honestly, though, 90s setting or not, common sense says this will essentially be a reboot for the franchise because it’s doubtful that Reeves will be happy about being forced to adhere to specific plot points like Wayne Manor being burned down and Robin being murdered by Jared Leto’s younger Joker.

Matt Reeves Is Planning A Trilogy 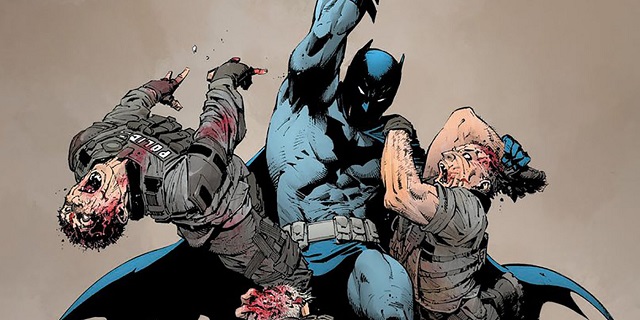 These days, an actor being signed to a three-picture deal is no great surprise, and we’ve seen stars who have ended up starring in trilogies along with those who have been done after just one appearance because a movie hasn’t exactly lived up to expectations.

With that in mind, Robert Pattinson being signed up to star in three movies is hardly a shock, but a number of outlets have claimed that Reeves is writing The Batman with an entire trilogy in mind. If that’s true, here’s hoping the filmmaker is able to write the screenplays a little quicker than he has with this one because, otherwise, we’ll be waiting three or four years between each chapter!

The Penguin And Catwoman Are “Confirmed” To Appear… 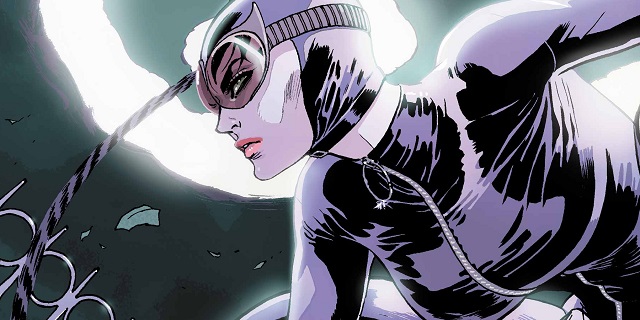 According to The Hollywood Reporter and a few different outlets, the lead villain in The Batman is expected to be The Penguin. He’s someone we’ve seen on the big screen before now and definitely a bad guy who could benefit from a contemporary makeover.

Another character whose name has been mentioned time and time again is Catwoman, and while Selina Kyle may have made an appearance in Christopher Nolan’s The Dark Knight Rises, it would be nice to get a comic book accurate version of the anti-hero on the big screen, especially after Tim Burton took her down a rather weird, gothic route way back when.

But before you dismiss The Batman as a Batman Returns remake, there’s some good news…

…We May See Even More Villains 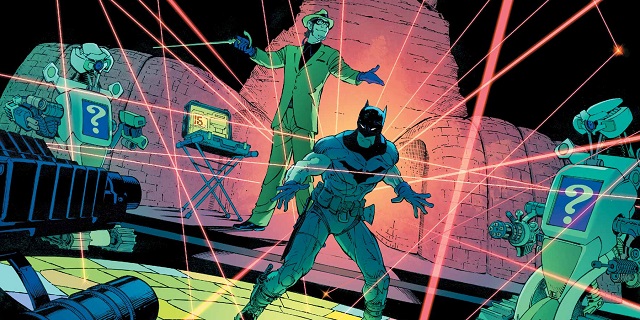 Batman’s world is full of amazing villains, and that’s not something Reeves is going to be shying away from. Apparently, we could end up seeing as many as half a dozen of his rogues and The Riddler’s name keeps popping up. Whether this means Batman will be facing multiple bad guys or simply paying a visit to Arkham Asylum remains to be seen, but the filmmaker may have sequels in mind.

After all, laying the groundwork here for more villains means he can gloss over their origin stories (something the Dark Knight’s villains have never really needed) and just dive straight into new adventures which are bound to make comic book fans happy. 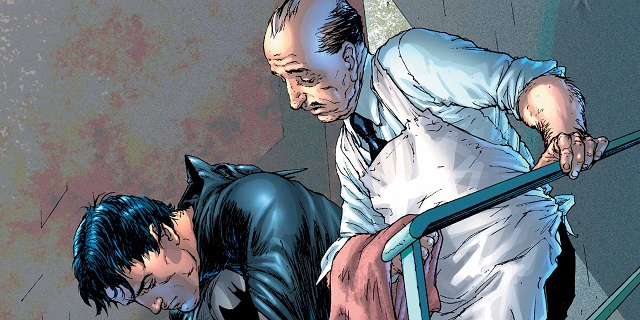 Jeremy Irons was a great Alfred Pennyworth and while his screentime in Justice League was minimal, it doesn’t take a genius to figure out that J.K. Simmons could have stolen the show as Commissioner Gordon. Sadly, it doesn’t sound like either of them will be returning for The Batman.

Instead, we’ll most likely be getting new versions of both characters, presumably with younger actors taking on the roles. That’s a shame, but providing Reeves casts them well, it could still be great. 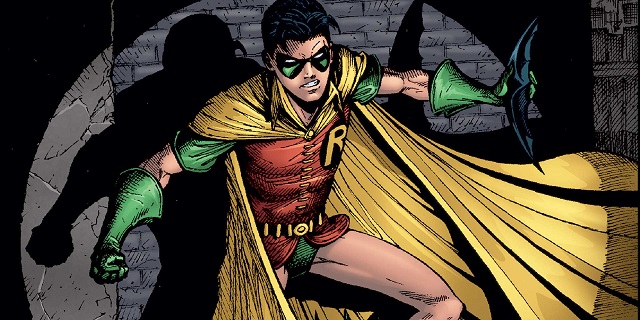 The Boy Wonder is currently part of Titans, but it seems as if that version of Dick Grayson will have ditched the Robin mantle after just a single season in order to become Nightwing. In terms of his big screen appearances, we’ve seen nothing of him since Batman & Robin (The Dark Knight Rises‘ “Robin” doesn’t really count…) so his return is definitely overdue at this point.

Well, while this should be taken as a rumour for now, it’s said that The Batman could end up reintroducing the character and it would definitely make sense for Reeves to explore this relationship over the course of three movies. After all, there’s a lot to be said about how and why Bruce Wayne could justify having a child by his side while fighting criminals and murderers.

The Focus Will Be On The Caped Crusader’s Detective Skills 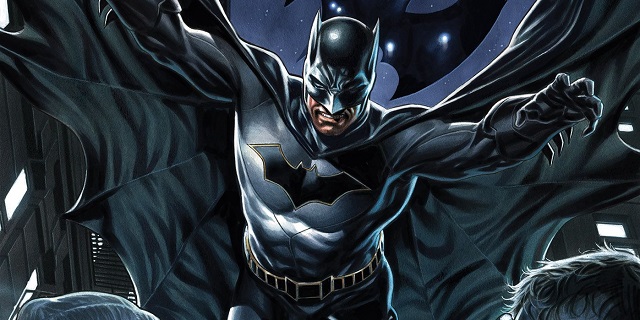 Every Batman film we’ve seen over the years has done a good job with the Dark Knight in very different ways, but if there’s one thing that they’ve all dropped the ball on, it’s the fact that he’s known as the World’s Greatest Detective. Well, Reeves has promised to put the spotlight on those skills and that could mean we’re getting a proper crime story that really makes use of more than just his fists.

With an enemy like The Penguin, a crime story like this makes sense, so fingers crossed Reeves’ screenplay delivers plenty of twists and turns in order to make this new take particularly memorable. 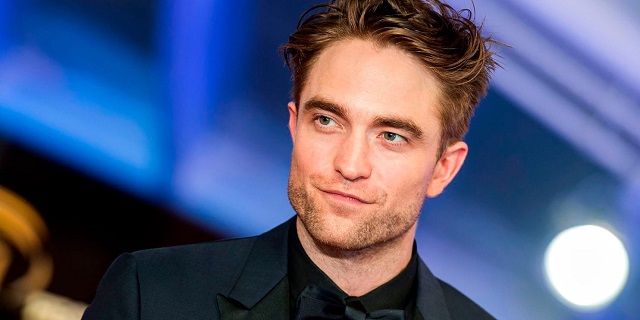 For those of you who are having doubts about whether Robert Pattinson really is Batman, the trades are reporting that it’s a done deal, and Reeves himself has now taken to social media to confirm that’s the case with a Tweet featuring a GIF of the actor along with three Bat emojis.

He beat Nicholas Hoult for the role and has signed a multi-picture contract which means “Battinson” (R.I.P. “Batfleck”) will be here for quite some time. That gives the actor plenty of time to put his mark on the character and we’ll hopefully get a trilogy as good as The Dark Knight series. 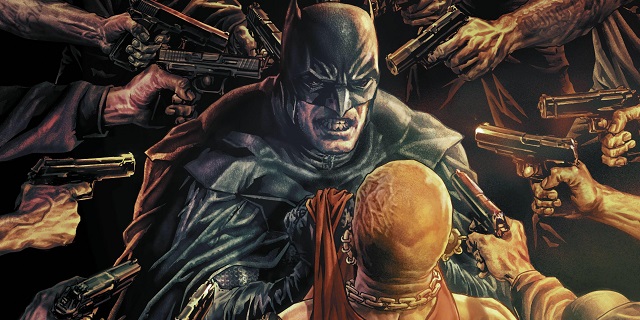 According to Reeves, we can expect The Batman to be a “point of view-driven, noir Batman tale.” He adds that, “It’s told very squarely on his shoulders, and I hope it’s going to be a story that will be thrilling but also emotional.” Honestly that sounds like a perfect approach to the property.

Tim Burton gave us a gothic take on the character, Nolan went down the realistic route, and Snyder went to the darker corners of Batman’s universe with a world-weary version of Bruce Wayne.

Now, Reeves has the opportunity to do something completely new and this “noir” approach may be the right direction to take things in. Time will obviously tell what that ends up looking like.

Production Will Begin Next Year 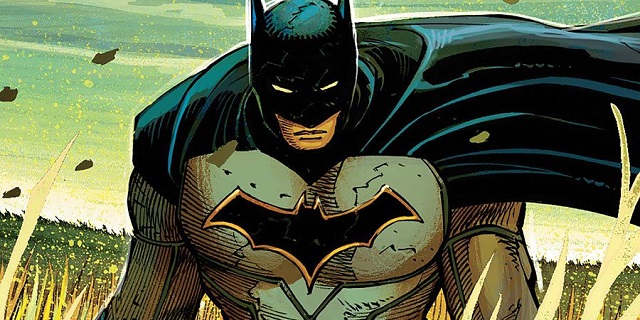 According to fairly reliable sources, The Batman will start shooting in the first quarter of 2020 and that actually gives us a good idea of what to expect both this year and next. For starters, casting will continue throughout the rest of 2019, and set photos are likely to start popping up when shooting begins – depending on where Warner Bros. and Reeves decide to transform into Gotham City.

A teaser trailer arriving at next year’s San Diego Comic-Con also makes sense given how the studio usually handled this type of thing, and it will hopefully be sooner rather than later we see Pattinson suited up as Batman as that costume reveal is always very exciting.

The Batman Is Inspired By Jekyll And Hyde 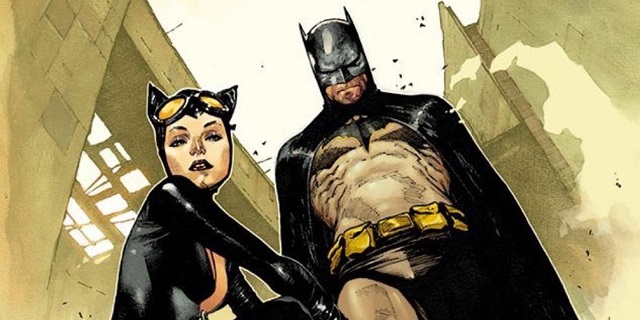 Late last year, Reeves was asked about his take on the Bruce Wayne/Batman divide and which of them is real and which is the facade. Interestingly, when it came to his inspiration for how that aspect of the character will be handled, the filmmaker pointed to Jekyll and Hyde being a factor.

“I think that it’s interesting, because one of the things that I’ve found interesting, just as we’re working on the story, is looking back at Jekyll and Hyde, and the idea of your shadow-self, and the idea of, we are all multiple things. It’s different aspects of who we are, and I think there are times when maybe the surface of Bruce is not really who he is, but that’s his disguise. There are times when Batman’s the disguise, but there are times when his true essence comes out, because by being veiled, a kind of instinctual side comes out that’s very pure.” 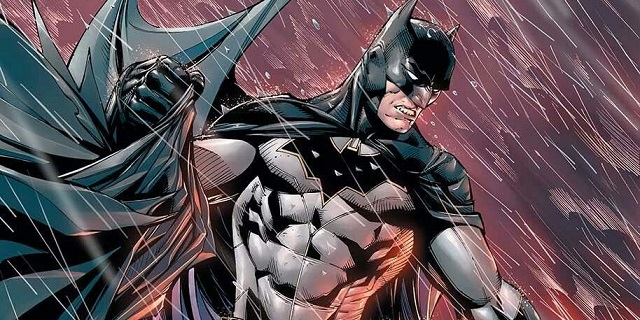 We first learned that The Batman would be the new film’s title when Affleck was still in the director’s chair, and while it’s definitely a cool name for the DC Comics adaptation, there’s nothing to say that Reeves will want to keep it (after all, he completely ditched the screenplay Affleck and Johns wrote).

Asked what the title will be in an interview last year, Reeves said: “Right now it’s called The Batman. What it will be called ultimately, I don’t know…” In other words, expect it to change, and if it does, Warner Bros. will more than likely reveal the title when production starts in early 2020.