The trailers for Men in Black: International didn’t exactly succeed in getting fans hyped for the fourth installment in the sci-fi comedy franchise, but the (re)pairing of Thor: Ragnarok stars Chris Hemsworth and Tessa Thompson ensured some good will, and people seemed ready to give the film the benefit of the doubt.

Now, the embargo has lifted, and while it doesn’t look like MIBI is going to be a critical washout like Dark Phoenix, most of the reviews do suggest that we’re in for a fairly bland retread of the earlier movies.

Check out some excerpts from the first wave of reviews below, and let us know if you plan on seeing Men in Black: International in theaters. You can take out all sorts of things and replace them with shiny new alternatives, and the result might look like a perfectly functional film with some nice special effects and tight action sequences. But if the heart and the humour of the original is lost, and you don’t replace it with anything remarkable, you’ll end up with a film like Men In Black: International. It may be a Men In Black film on paper, but the soul of the series is missing and the experience of watching it is mostly a letdown. Has anyone got a neuralyzer?

Coming seven years after the humourless MIB3 and blessed with neither of its stars, Men In Black: International arrives as possibly the least essential film of the summer. And yet, despite a throwaway story and slightly indulgent runtime (Sonnenfeld never strayed far from the 90-minute mark), H&M prove surprisingly engaging company.

International is better than Men in Black II and worse than Men in Black III, and they’re all bad, so erase this sentence from your memory. This fourquel’s a special bummer, because Thompson and Hemsworth shined together in 2017’s Thor: Ragnarok. Hemsworth reimagined his epic hero as a cheerful doofball with a busted hammer, letting Thompson dominate as a charisma firebomb on a millennia-deep bender. A good idea to reunite them, and that’s it for International‘s good ideas. Fans of the series know that the sunglasses only go on when the neutralizer’s about to zap some poor sap’s recollection of past events. “Men in Black: International” aims to erase any memory that you’ve seen all this before, but only leaves you with the hazy sense of deja vu, and the lingering conviction that the last time was a whole lot better.

All the sprightliness that Hemsworth showed in the Avengers movies and in the Ghostbusters remake is nowhere to be found: both script and direction mean that the spark isn’t there, and Thompson has no real chance to shine. It’s time to wave the neuralyzer in the face of every executive involved and murmur softly: forget about this franchise. That frenetic plotting, combined with workmanlike direction from F. Gary Gray (a once-exciting filmmaker who brings as little to this film as he did to The Fate of the Furious), overwhelms whatever natural spark Hemsworth and Thompson might have had together.

Men in Black: International will not be the best movie you see this year. There are plot issues, character arcs go unfinished, and the ending felt rushed. But it’s still a campy, cool sci-fi spy thriller—one that coasts on the natural charisma of Tessa Thompson and Chris Hemsworth, who may be one of this generation’s best comedic duos.


SOURCE: Io9
Disrupting the proven rapport between two naturally charismatic actors in an adventure indifferent to the series’ premise, director F. Gary Gray (The Fate of the Furious) assembles a noisy, rushed, overlong, deeply unsatisfying spinoff that lacks good characters, a coherent story, or even just the fun energy of its forebears.

Eye-catching stop-offs in Paris, Marrakech and Ischia give MIB:I a scale missing in earlier instalments, while Kumail Nanjiani has fun voicing a diminutive alien chesspiece. For all its globe-trotting, desert-blasting and hoverbike-riding, however, there’s little here that justifies prolonging a series that should probably have been Neuralyzed a couple of movies ago.

The best thing about the revamped Men in Black series is actually a woman. Stepping in after three very successful entries starring Will Smith and Tommy Lee Jones for this reboot, Tessa Thompson shines brightly alongside her Thor: Ragnorak co-star Chris Hemsworth as Agents M and H, who set off to surreptitiously thwart yet another alien assault on world order, such as it is.


SOURCE: THR
The degree to which Men in Black International wastes Hemsworth and Thompson’s talents — and in the process almost makes them seem like bland, uninteresting actors, despite all the previous evidence to the contrary — is almost an accomplishment in and of itself, and the rest of the film is equally pointless (not to mention long, at just under 120 minutes). 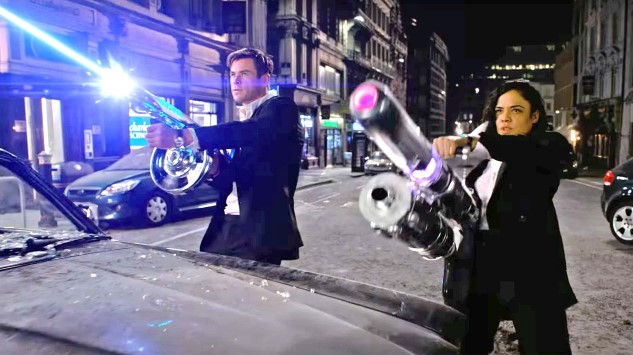 The new “pet” alien is the sole survivor of a tiny race caught up in the mayhem, a hamster-sized palace guard named “Pawn” (“Pawnie” to his new pals) and voiced, to amusing effect, by Kumail Nanjiani of “The Big Sick.” Not amusing enough, but that’s kind of what we’re dealing with, here.

Men in Black: International may be the new go-to example of “IP reboot that fails despite talent you otherwise like trying their best to make it memorable.” It happens every few years, and despite a few of them otherwise succeeding at being good movies in and of themselves (like Ghostbusters: Answer the Call in 2016 or Power Rangers in 2017 or Puppet Master: The Littlest Reich in 2018), the end result is always the same: forgotten down the corporate and cultural memory hole until a few years have passed and another reboot is configured from new fads to once again cash in on hopefully riper nostalgia. One of the film’s most engaging traits is its absolute inanity. It is not trying to hold up a dark mirror to humanity and to make points about pollution, destruction or political persecution. Instead, the main intention is to serve up chases, slapstick and knockabout comedy.

Men in Black: International doesn’t much care about being a Men in Black movie, but did they ever? Squishing aliens with a shrug – splat, forget, move on – has been the name of the game since the original pairing of Will Smith and Tommy Lee Jones delivered the smash hit of 1997.

That lack of tension pervades the entirety of International. It feels like Men In Black by numbers, a trudge from one set-piece to the next untidily glued together by weak gags and sharp suits, never getting us to care about its characters or the world-changing stakes. In fact, like the first film’s Bug bad guy, it feels as though something unfamiliar is wearing Men In Black’s skin – except what’s inside is, somehow, just really dull.

For the most part, Tessa Thompson shines in an otherwise uninspired and mostly unfunny reboot that really doesn’t give much hope for the future of this franchise.

The world feels right, at least, but Men in Black: International is never as fun or as thrilling as it should be for an action-comedy. You won’t want to neuralyze it from your brain, but in truth, it probably won’t linger that long anyway.

Gray takes few chances narratively, providing the viewer a fairly standard blueprint of where the film is going to go. That said, Holloway & Marcum utilize the rules of the franchise well, incorporating a couple of twists that feel fresh if not altogether unexpected. The camera clearly loves Tessa Thompson, continuing to promise a bright future for the young actress. As for Hemsworth, here’s hoping he continues to play funny. This is breezy stuff, a welcome respite in the hot summer months.

“Recognizable as only déjà vu, and dismissed just as quickly,” pretty much summarizes the newest installment in the interminable Men in Black franchise.