Game of Thrones is finally getting the full 4K treatment.

After deciding against releasing the full series on 4K Ultra HD last winter, instead opting for a Blu-ray only release that was packed to the brim with special features, HBO Home Entertainment has officially announced plans to release Game of Thrones: The Complete Collection for the first time ever on 4K Ultra HD.

The Complete Collection will be available on November 3, both physically and digitally. It’s currently available to pre-order for $209.99 from both Amazon and Best Buy and, for diehard fans, will also be available as a limited edition Best Buy-exclusive Steelbook for $239.99.

Currently, only the first and eighth seasons are available to own in 4K Ultra HD, so this will be the grand debut of seasons two through seven on the premium format, meaning some of the most acclaimed episodes – including “Battle of the Bastards;” “The Rains of Castamere;” “Hardhome;” and more – of the worldwide phenomenon will be viewable in the highest home video quality imaginable.

As for special features, it’s expected to contain everything that was included on the Complete Series Blu-ray set that was released last December. Full details can be found below.

THE WORLDWIDE PHENOMENON
GAME OF THRONES®:
THE COMPLETE COLLECTION
FOR THE FIRST TIME EVER IN 4K ULTRA HD
AVAILABLE NOVEMBER 3, 2020

The Only Way to Watch the Complete Iconic Series in 4K Ultra HD,

Just in Time for the 2020 Holiday Season

BURBANK, CA, July 9, 2020 – The #1 selling home entertainment television series of all time*, and most-watched series in HBO history, Game of Thrones remains a blockbuster hit and cultural sensation. Now, for the first time ever, the entire series can be owned in spectacular 4K Ultra HD when Warner Bros. Home Entertainment releases Game of Thrones®: The Complete Collection on 4K Ultra HD Blu-rayTM on November 3, 2020. Featuring all 73 episodes along with over 15 hours of bonus content, plus Digital Copy (US only), this must-have set is priced to own at $254.99 SRP ($289.99 in Canada). Game of Thrones Seasons 1-8 are also available to own on Digital in HD via purchase from digital retailers.

Game of Thrones: The Complete Collection on 4K Ultra HD will also be available in an exclusive limited-edition version at Best Buy for $285.43 SRP ($320.43 in Canada). Containing the same episode and bonus content, all eight epic seasons will be featured in individual steelbooks and housed in a striking individually numbered metal case.

Based on the best-selling novel series by George R.R. Martin, Game of Thrones has earned a total of 161 Emmy® nominations and 59 wins, which are the most nominations and wins of any Comedy or Drama series in Emmy history. The Cultural Phenomenon also stands as HBO’s most-viewed program ever, with the final season averaging a record-setting 44 million viewers in the U.S.

“We are thrilled to offer Game of Thrones fans an in-home viewing experience worthy of the groundbreaking show with the long-awaited release of Game of Thrones:  The Complete Series on 4K Ultra HD,” said Rosemary Markson, WBHE Senior Vice President, Television Marketing.  “For the first time ever and unavailable anywhere else, loyal fans and collectors will be able to enjoy every extraordinary moment of this iconic show in eye-popping 4K Ultra HD with Dolby Vision HDR.  Packed with over 15 hours of special features spanning all 8 seasons and a digital copy of every episode, this collectable set also makes a perfect holiday gift!”

The 4K Ultra HD discs of Game of Thrones: The Complete Collection will feature Dolby VisionTM HDR that dramatically expands the color palette and contrast range and uses dynamic metadata to automatically optimize the picture for every screen, frame by frame.

The 4K Ultra HD release includes over 15 hours of bonus features originally released on the 2019 Game of Thrones: The Complete Series and The Complete Collection (Limited Collector’s Edition) Blu-ray sets.

MORE THAN 15 HOURS OF BONUS FEATURES INCLUDING

Game of Thrones Seasons 1-8 and The Complete Series are currently available to own on Digital. Digital purchase allows consumers to instantly stream and download to watch anywhere and anytime on their favorite devices. Digital movies and TV shows are available from various digital retailers including Prime Video, Apple TV, Google Play, Vudu and others. 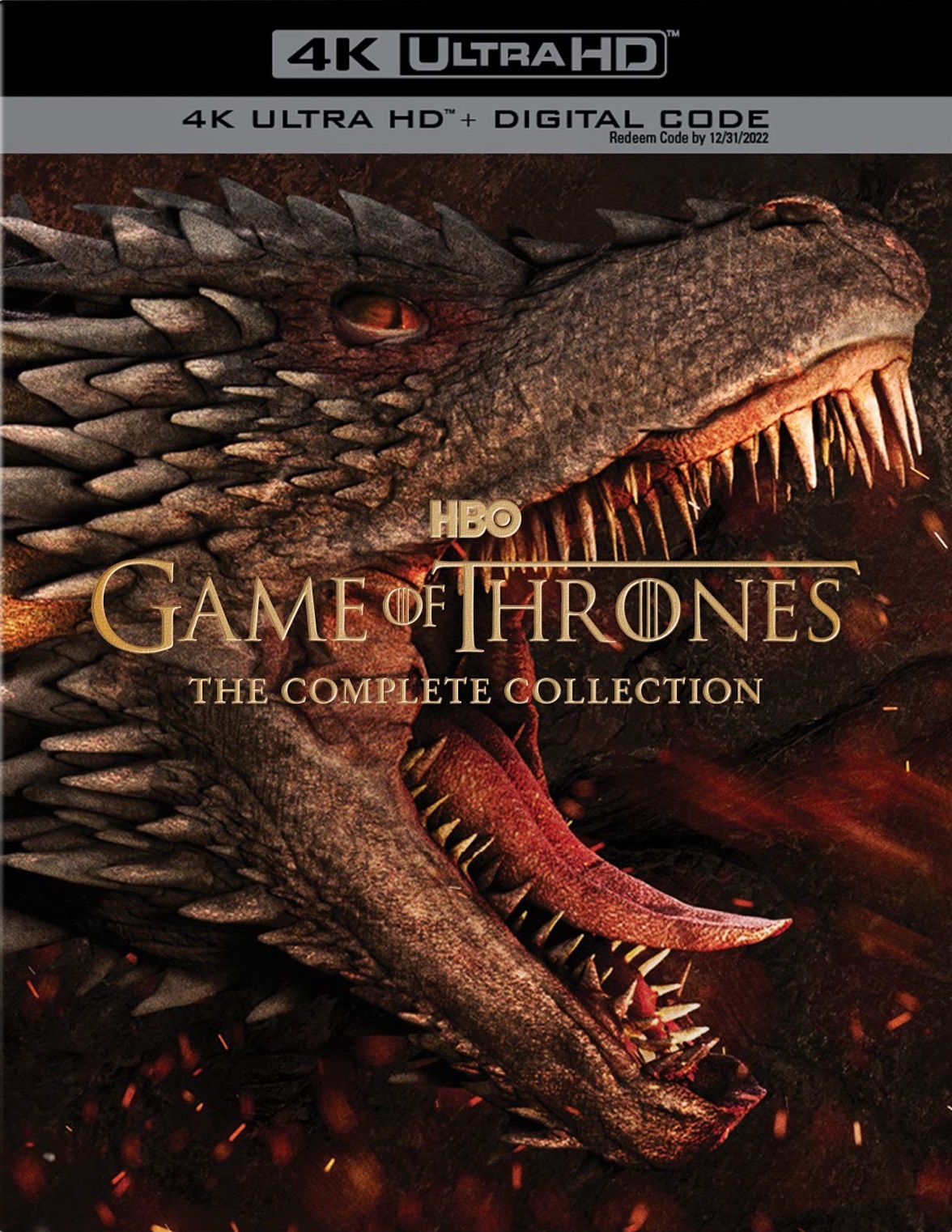 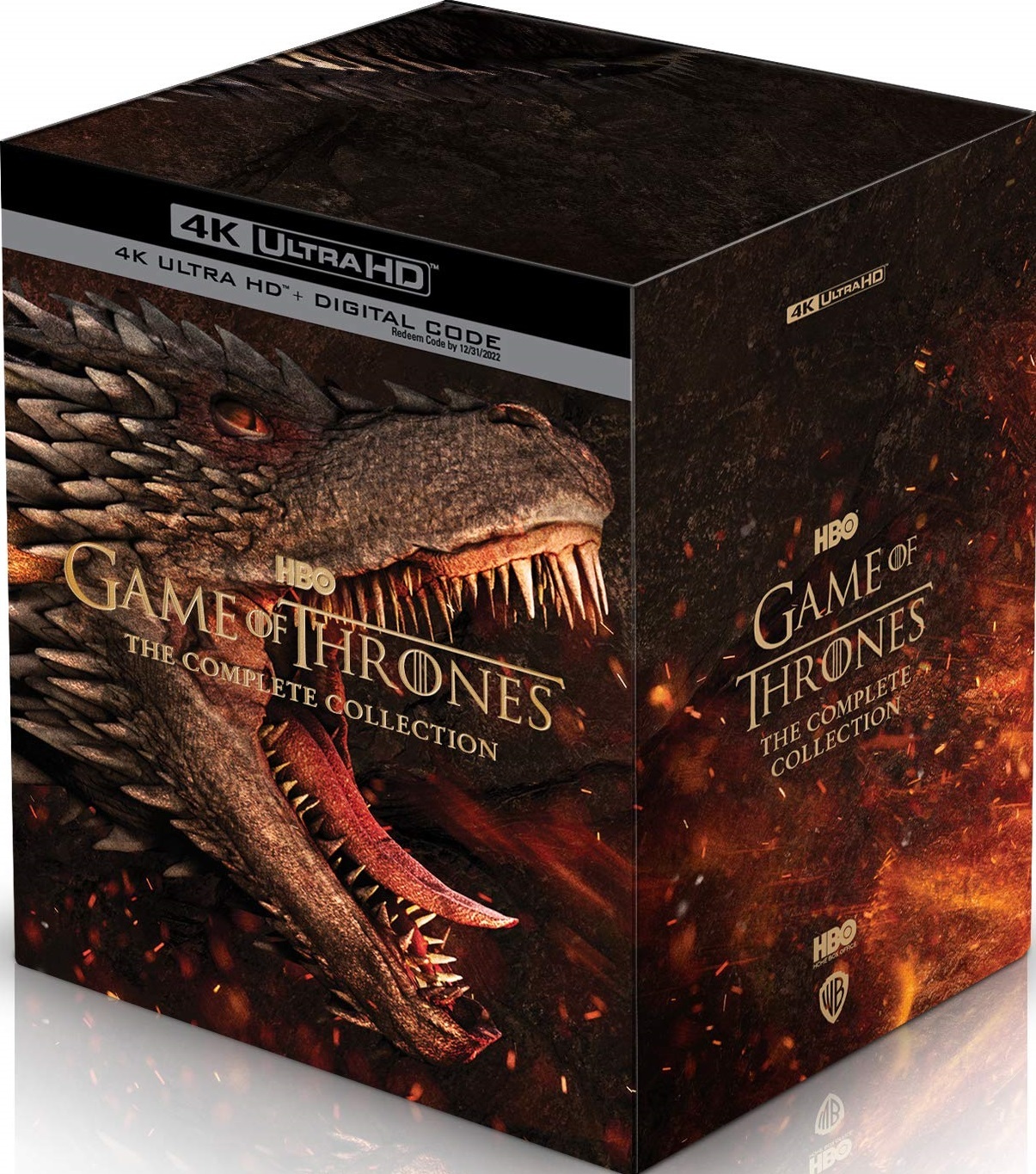 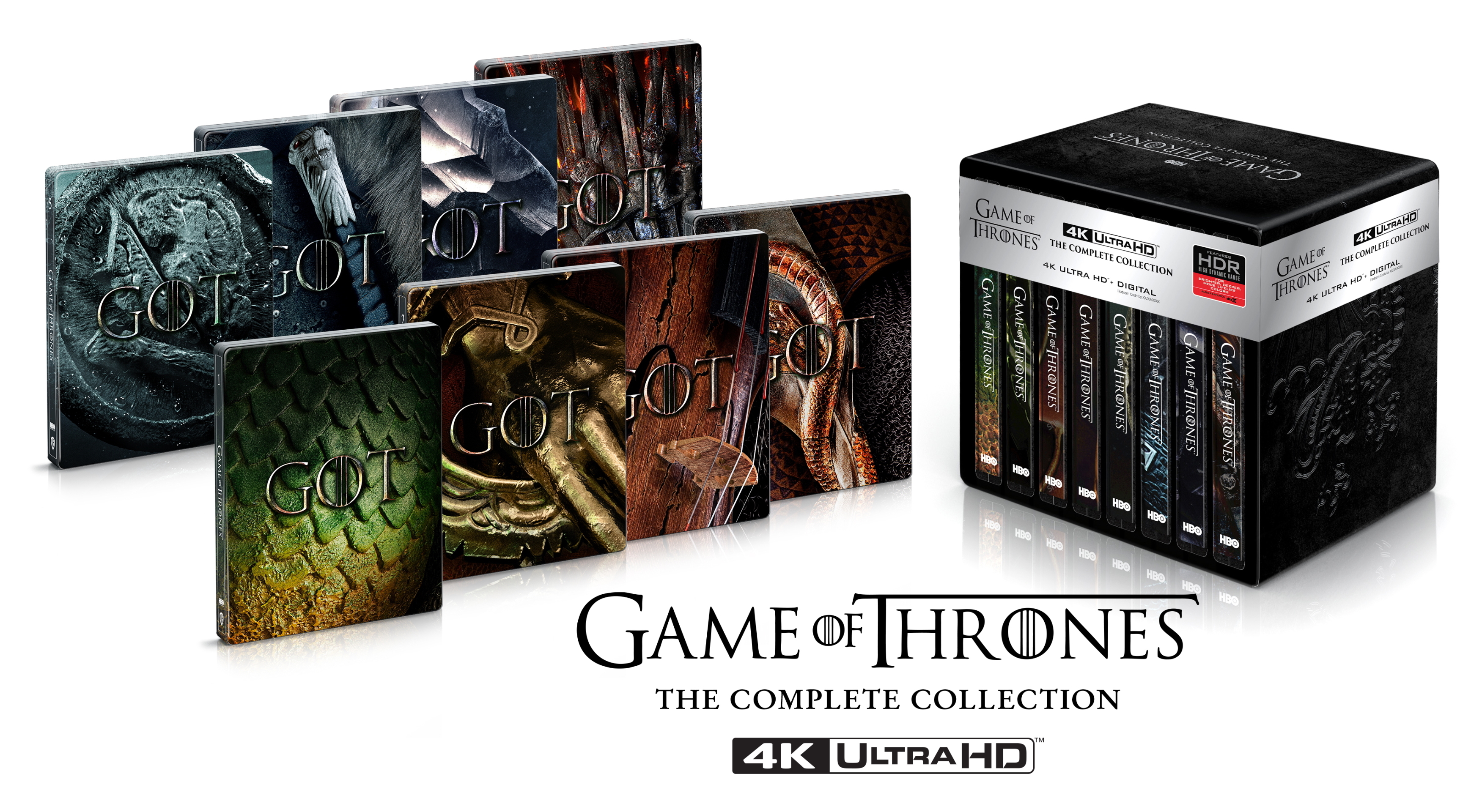