Earlier this week, we shared some pretty crazy concept art from Josh Trank’s 2015 reboot of Fantastic Four (if you missed it, you can check it out by clicking HERE). Getting to see what might have been for Marvel’s First Family in that movie generated a big response so we’re now going back even further to the 2005 and 2007 movies which marked the team’s big screen debut.

Directed by Tim Story, both movies had their good points but ultimately disappointed. All these years later, they’ve mostly been forgotten but Fox clearly considered taking things in a slightly more exciting direction from a visual standpoint if nothing else.

In this gallery, we get to see some of those weird alternate takes on the team’s costumes and origin story as well as characters like Doctor Doom and Galactus (it turns out the latter looked a lot more like his comic book counterpart and less like a big cloud of space dust once upon a time).

We also have amazing storyboards showing unfilmed scenes, Doombots, and much, much more!

There’s a lot of really cool stuff here, particularly for Rise of the Silver Surfer, a sequel which definitely improved on its predecessor. So, to check it out, simply hit the “View List” button below.

The moment the Fantastic Four receive their powers should be every bit as weird and grotesque as what we see here but their transformation in the movie was safe and visually boring.

This is also far more comic accurate as we see Reed, Sue, Ben, and Johnny bombarded by actual cosmic rays moments before their lives are changed forever (we need to see this in the MCU).

Reed’s lab looked pretty cool on the big screen but the budget and technology at the time didn’t really allow Story to push the boundaries as much as he probably would have liked.

The same goes for the design of the Baxter Building itself and so we ended up with a pretty normal looking skyscraper, albeit with a landing pad for the team’s Fantasticar.

That appears to be the chamber Reed planning on using to transform The Thing back into Ben Grimm but, as we know from the movie itself, that simply wasn’t meant to be.

It’s widely believed that the Marvel Cinematic Universe’s version of the Fantastic Four will end up moving into the one-time Avengers Tower and that makes sense for a lot of reasons.

Doctor Doom clearly wasn’t always going to be coated in metal as we see here that he also crashed back to Earth but got horribly burned in the process, thereby explaining why he would don a suit of armour to cover his scarred visage.

Another look into the home of the Fantastic Four, there’s a reason this team is called “Marvel’s First Family” and these movies did their best to explore what that meant for the heroes.

Making Victor Von Doom a businessman was, well, honestly kind of lame but this office does look pretty awesome and suitably imposing for a man of his stature.

The fact the movies included the Fantasticar is definitely a bonus and something they deserve credit for, especially as it was something much harder to pull off back in 2005 and 2007.

Here, we see the team being chased down by the military as they presumably weren’t overly happy with these heroes also taking to the skies in order protect the world.

These designs are all really impressive but did you know that the Fantasticar was also meant to appear in Josh Trank’s movie? Unfortunately, it ended up being cut as a result of reshoots.

Well, this is a pretty unique take on Doctor Doom! The armour covering his face is amazingly intricate but not something visual effects would have been able to pull off back in 2005.

These costumes are very mid-2000s and The Thing…well, he just looks weird! Regardless, these silver and blue suits could have worked but the mostly comic accurate versions we got looked solid on screen.

Again, these are definitely unique and clearly from the very early stages of development. When Marvel Studios redesigns the team, it will be interesting seeing whether they go down the comic accurate route or totally reinvent them.

This isn’t the most exciting piece of concept art in this gallery but it was clearly meant to be The Thing’s gym and the inclusion of that “4” on the wall at the back is a nice little touch.

How great is this? As we mentioned, the Baxter Building that we got looked pretty boring but this is more like it and a genius way to incorporate the team’s logo into that. 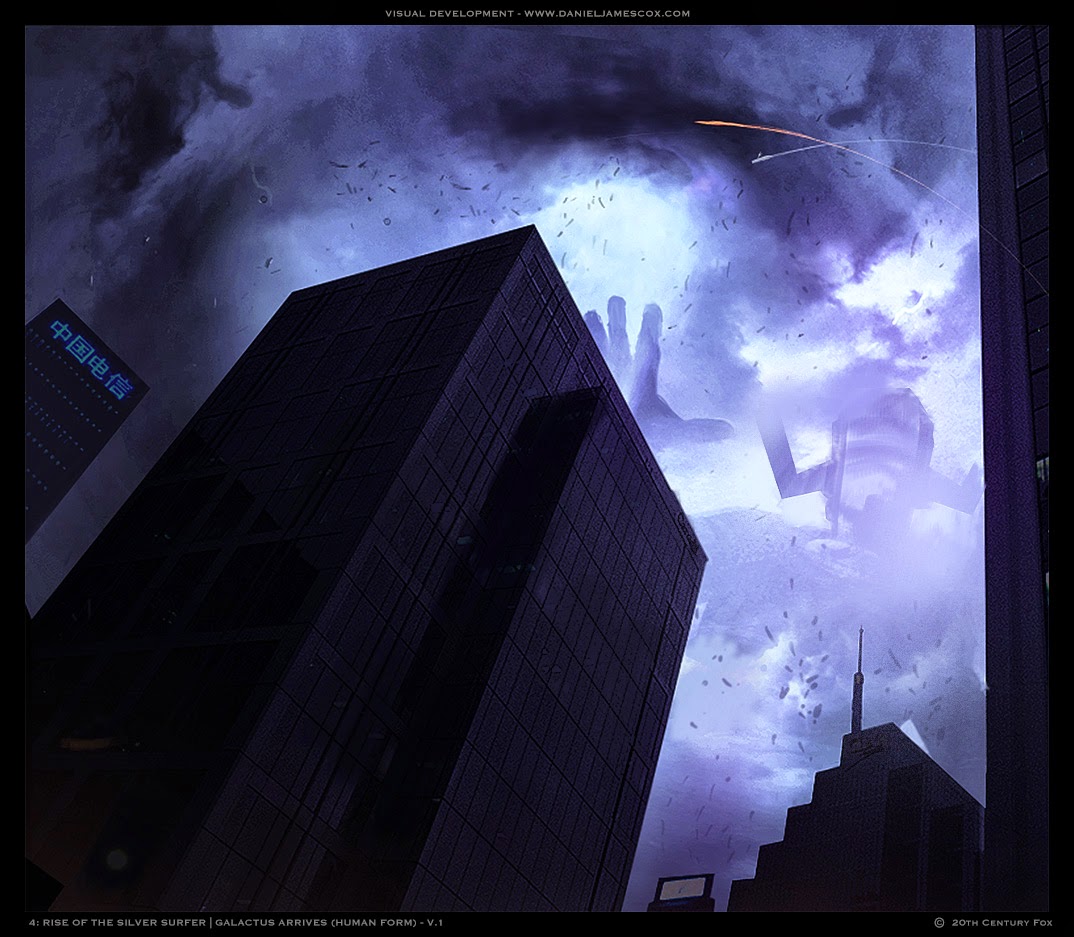 We caught a glimpse of Galactus within that cloud but Fox did at least consider giving the iconic villain his human form and we see him looming over Earth in this great piece of artwork. 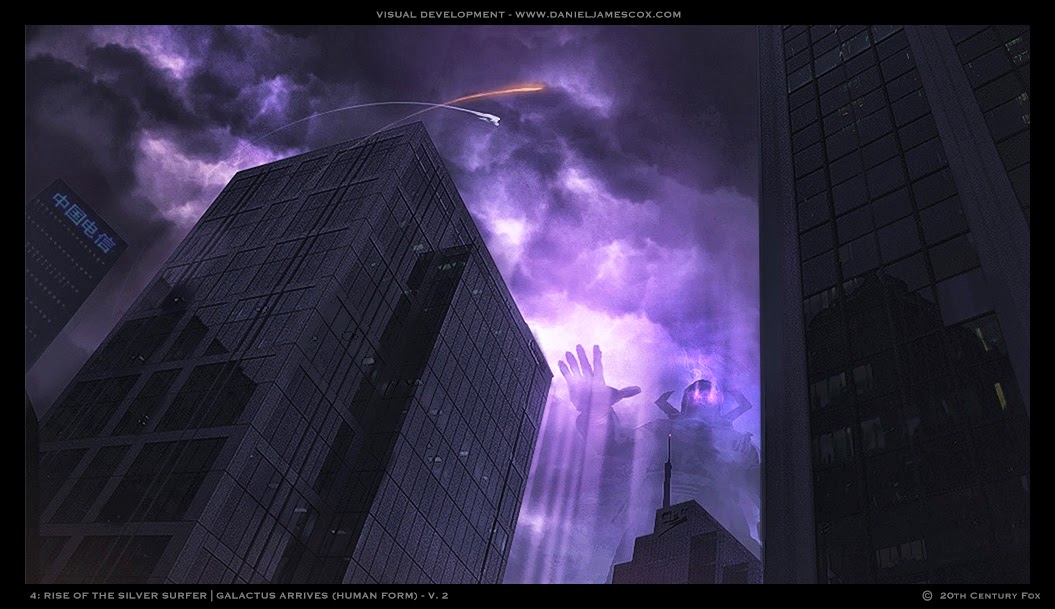 As the Silver Surfer and Human Torch race into action, Galactus powers up with the intention of making Earth his next victim. Even just a glimpse of the villain in this form would have been much appreciated by fans. 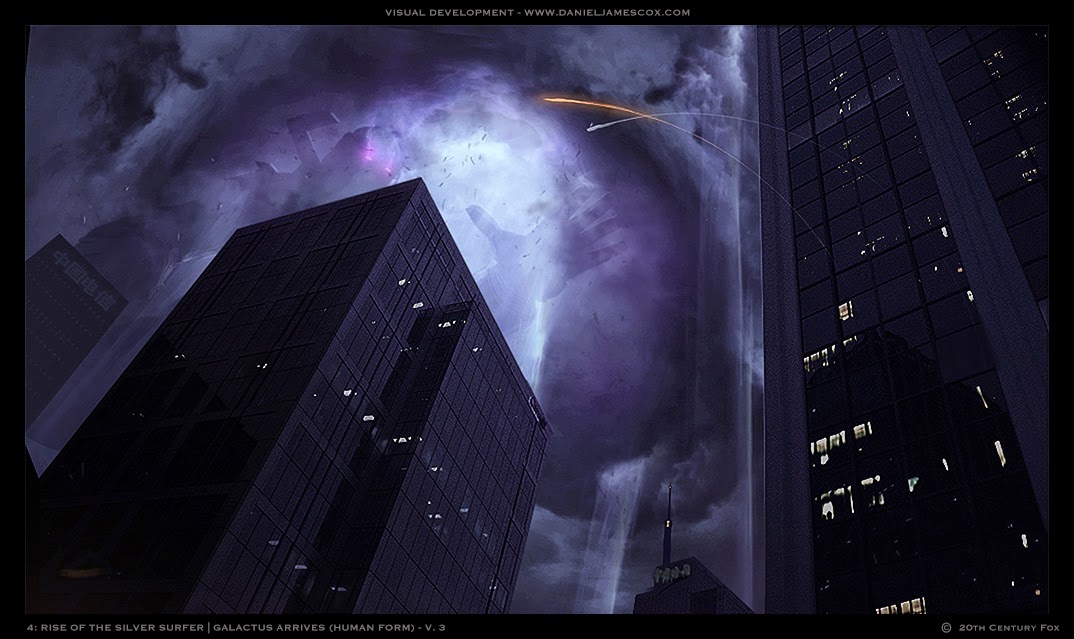 Kevin Feige offered Fox the chance to keep Daredevil in exchange for Galactus and the Silver Surfer years ago, so he’s clearly had big plans for the characters in the MCU for a very long time. 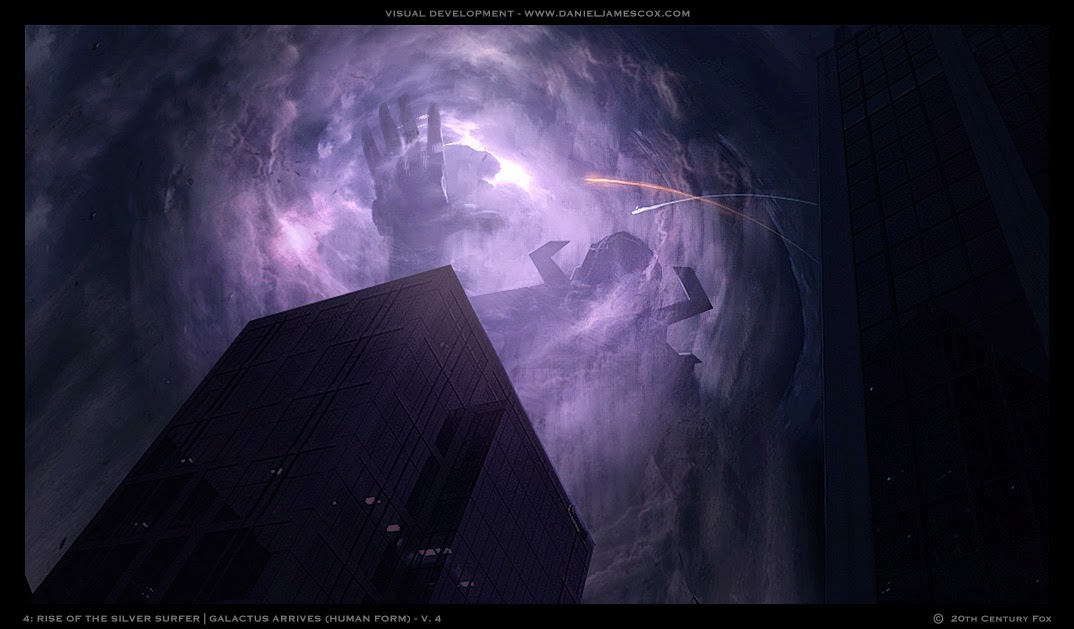 Dormammu was largely wasted by Marvel Studios in Doctor Strange (he was great but deserved a bigger role in proceedings than that), so here’s hoping Galactus eventually becomes the MCU’s new big bad. 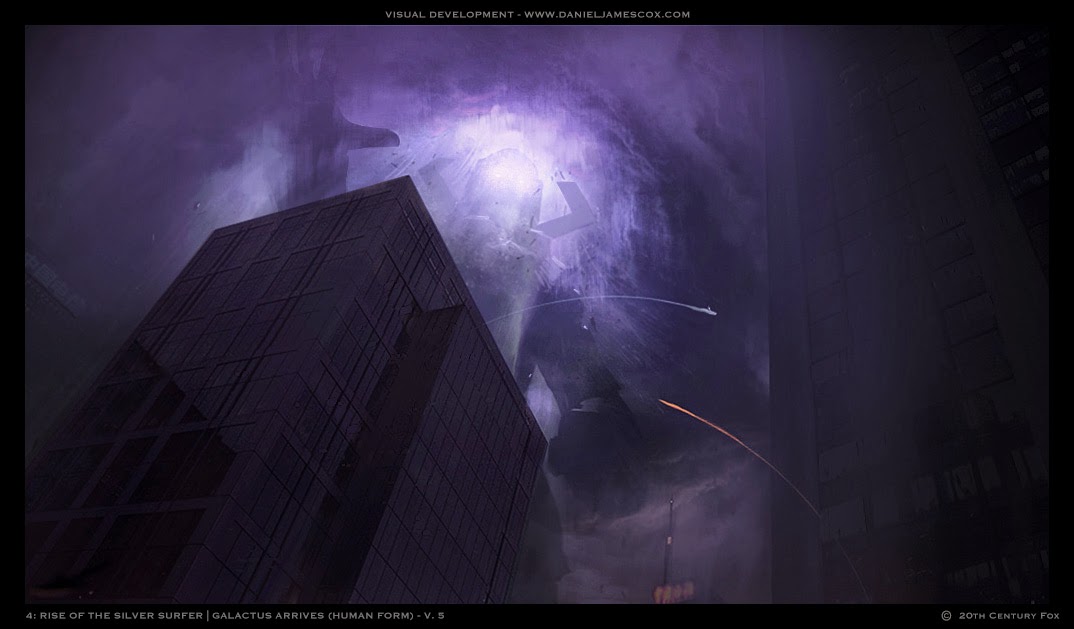 Even if this had been all we’d seen of Galactus in Rise of the Silver Surfer, it would have been so much better than what ended up on screen as that cloud was one of the worst things Fox ever did! 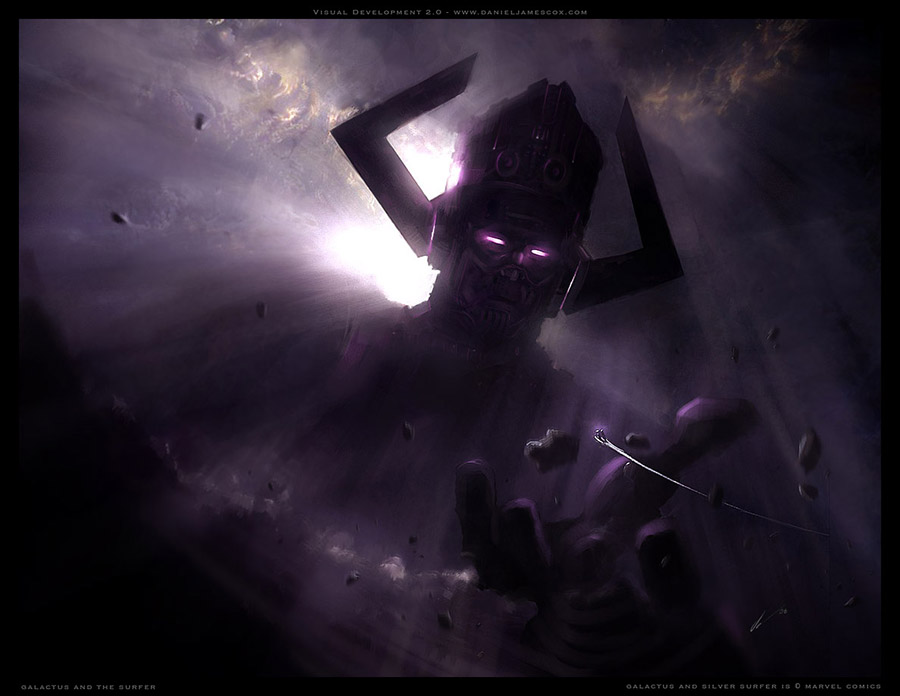 This would have been epic to see. Alas, it was just created for reference by the artist and not one of the pieces Fox considered during the pre-production stages on Rise of the Silver Surfer. 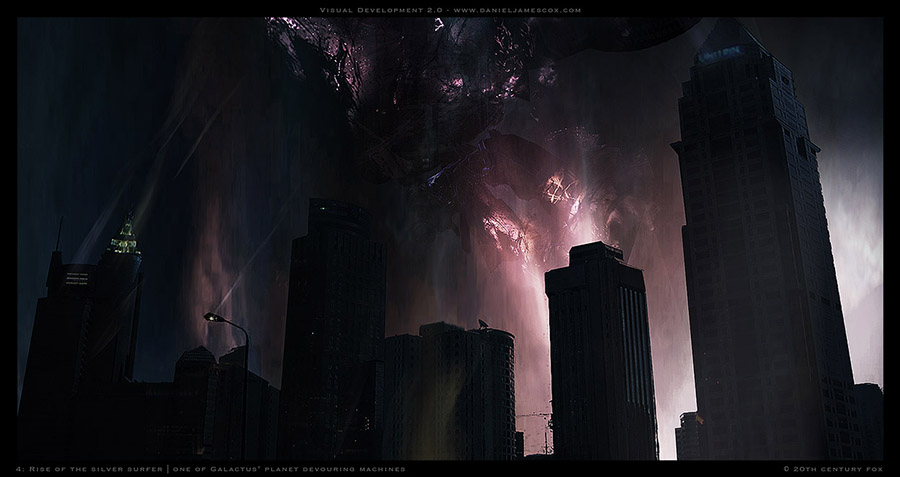 We’re not sure what’s supposed to be happening here but it looks like this could be some sort of massive machine or energy source that Galactus was going to use to destroy the Earth. 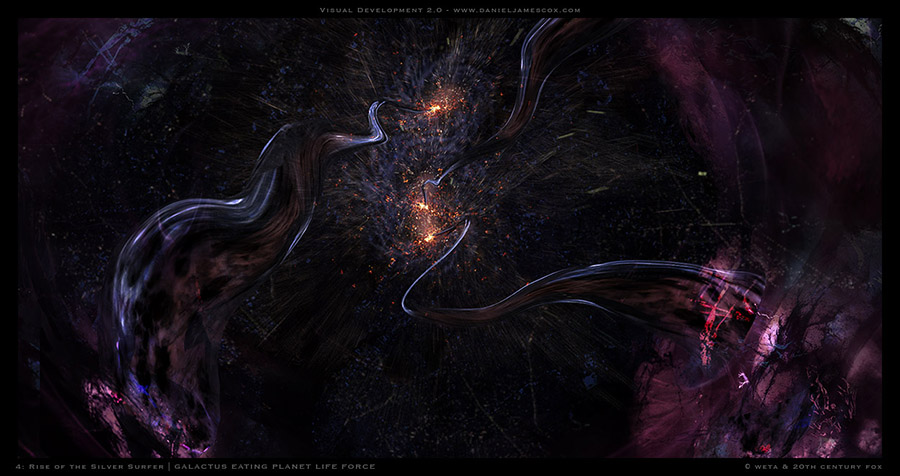 These are some pretty crazy visuals and another strange take on Galactus as Story clearly wanted him to be portrayed as an energy force of some kind rather than a huge man in a suit. 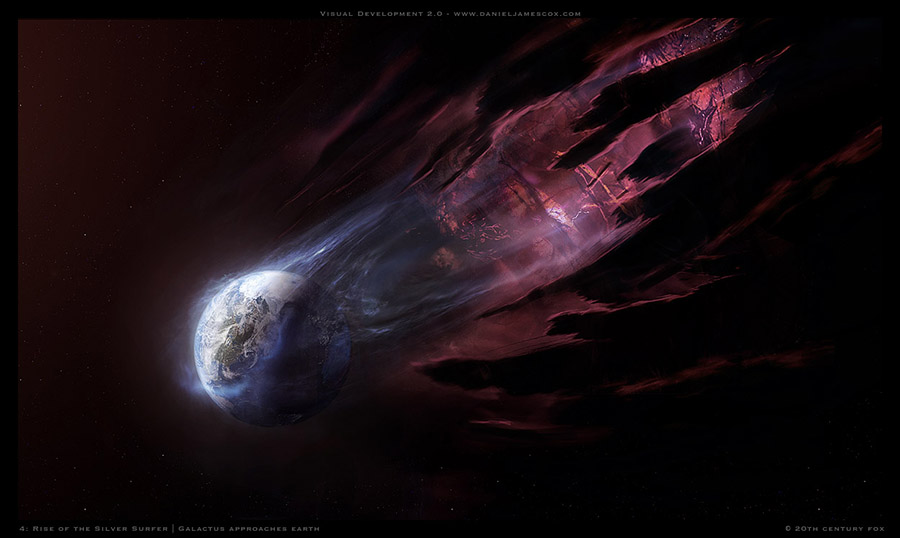 While this does work in some respects, it isn’t Galactus and certainly not the version from the comic books fans wanted to see…if nothing else, Earth being drained like that does look quite cool. 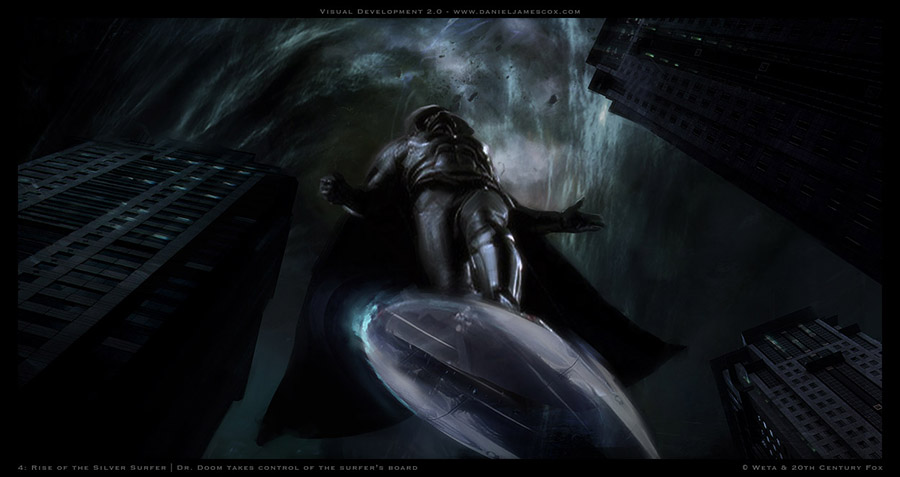 Doctor Doom riding the Silver Surfer’s skateboard was a weird decision but one that worked surprisingly well in this sequel and certainly something you can imagine his comic book counterpart doing. 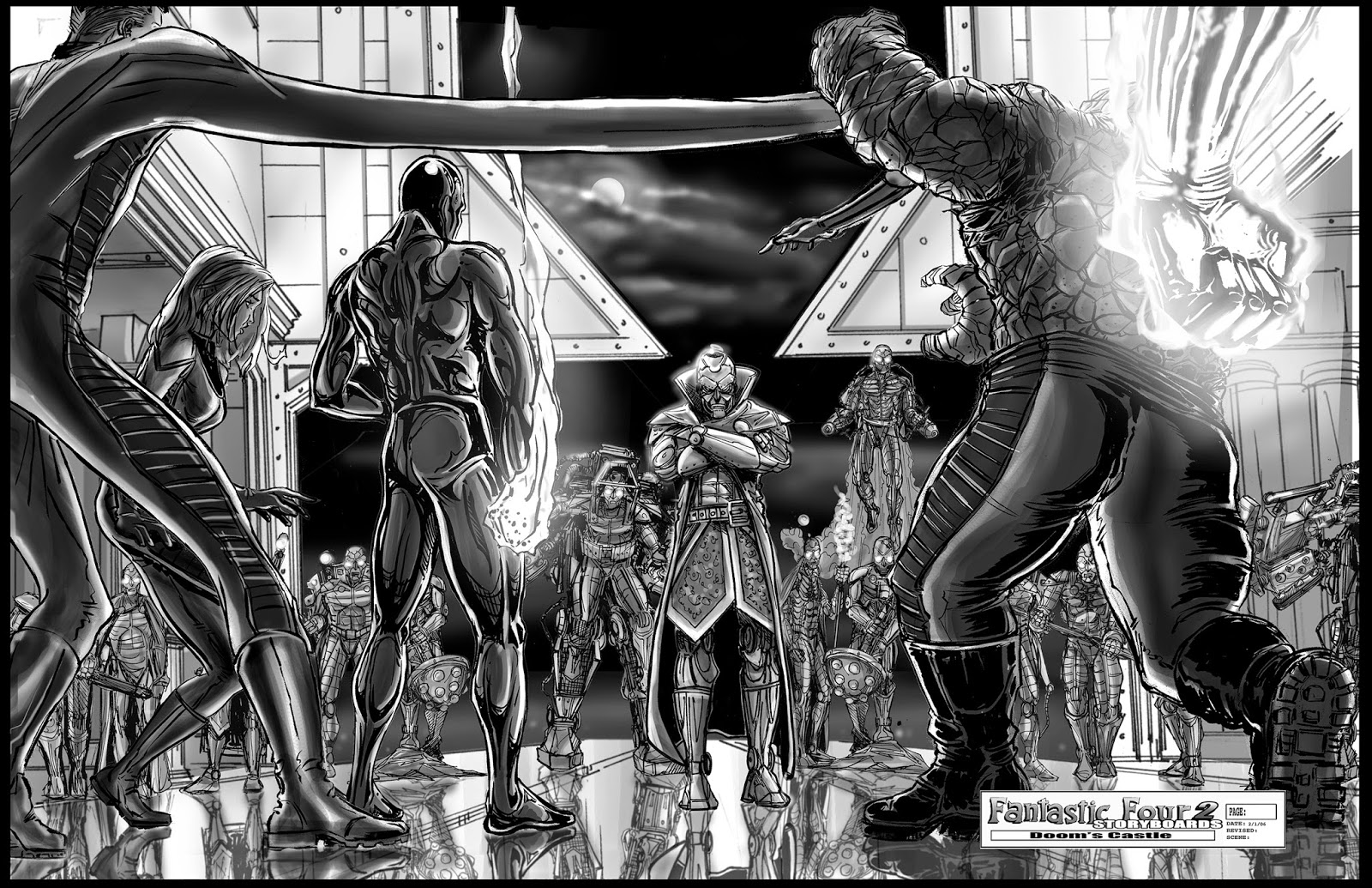 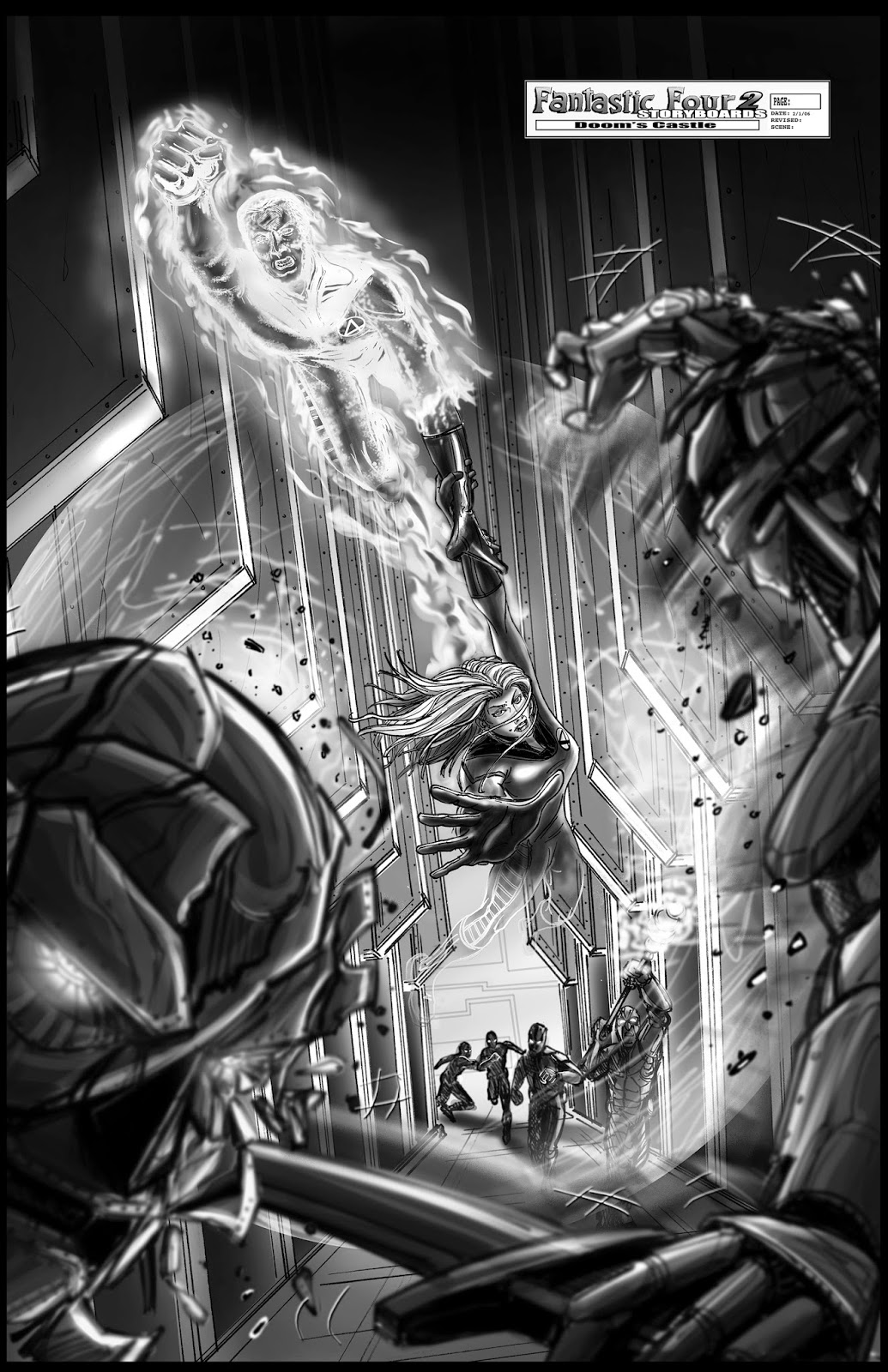 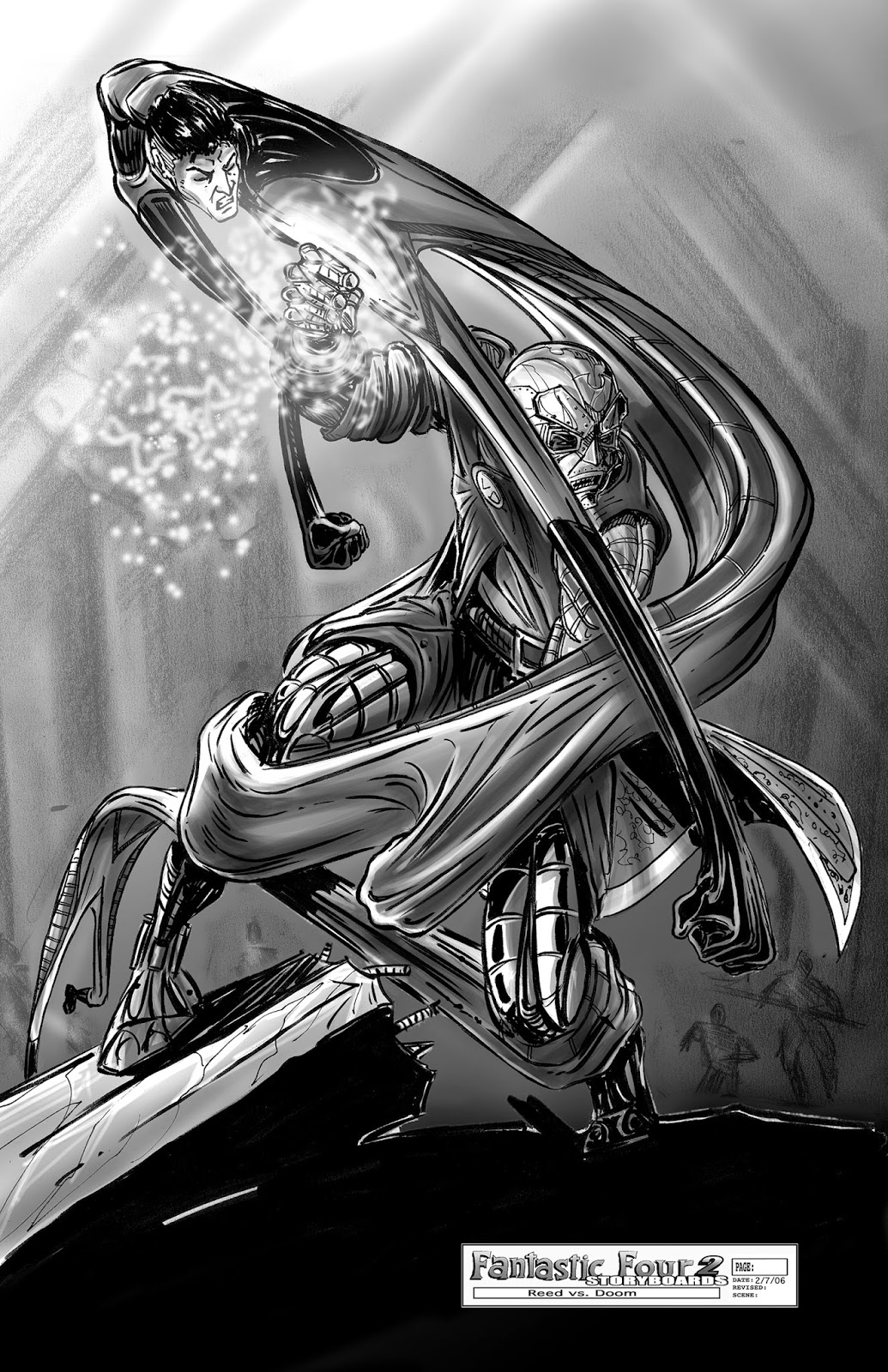 “In early development, Dr. Doom’s castle in Latveria was a big presence in the film,” artist Darrin Denlinger explains. “While producing stuff for the studio presentation, I did series of illustrations detailing the Fantastic Four’s escape from the castle and Victor Von Doom’s army of ‘Doombots.'” 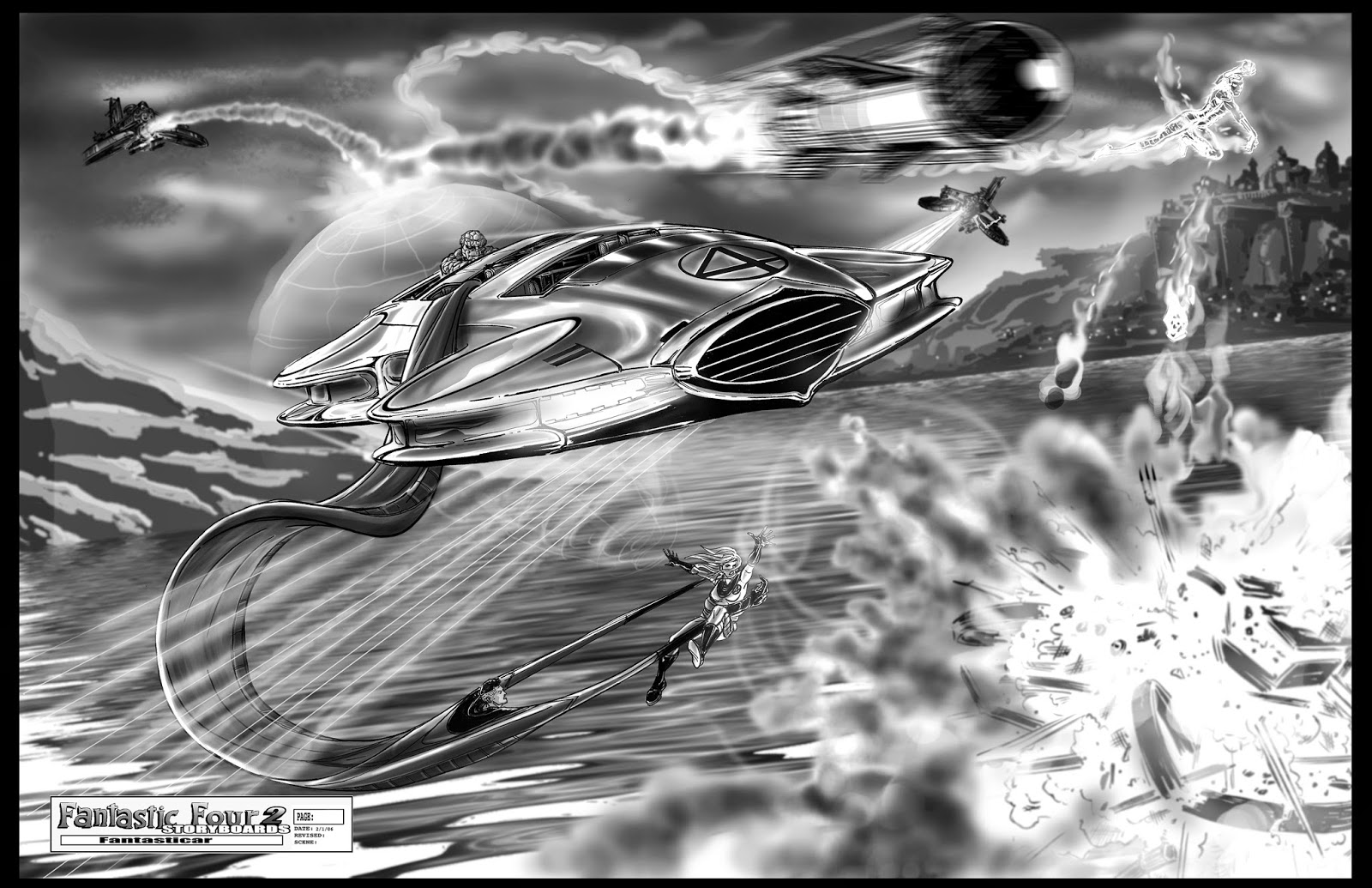 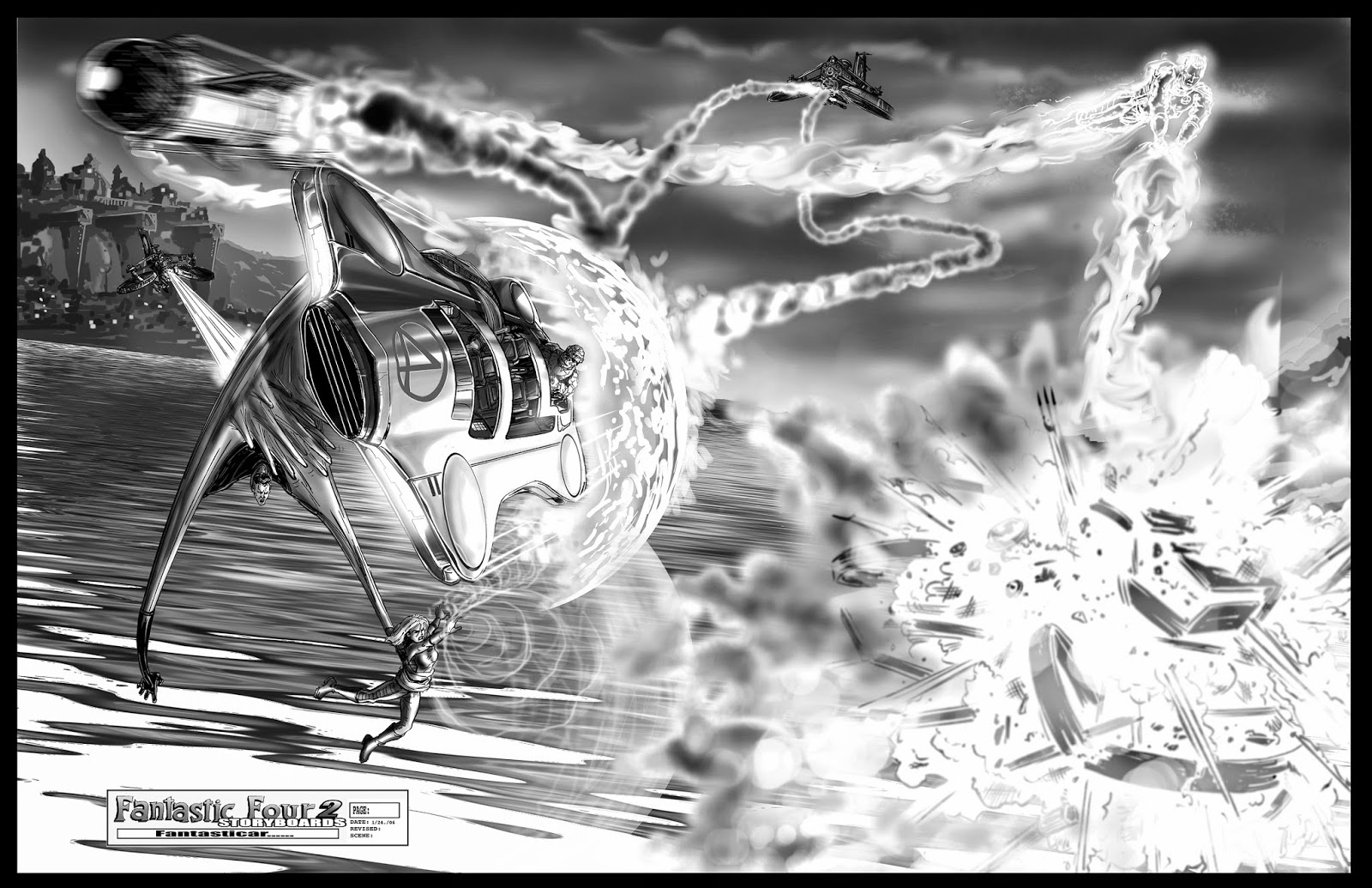 “Before the script was done, we explored several types of rescue operations that could show the team in action,” he continues. “Most didn’t get past the ‘wouldn’t it be cool if…’ stage.  I particularly love the underwater rescue with Ben Grimm in THING-sized scuba gear.” 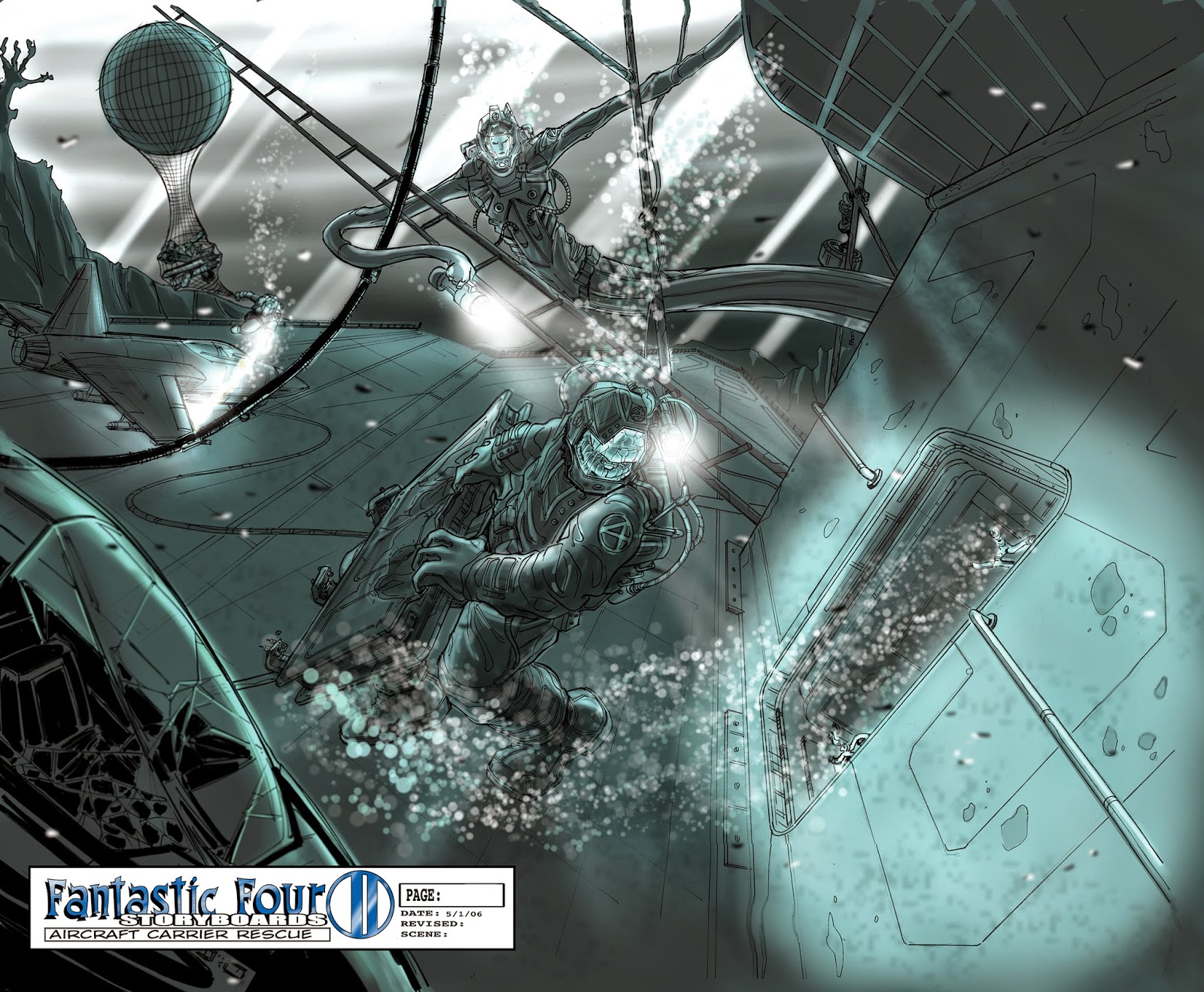 This really is a, well, fantastic visual and exactly what you’d hope to see from a movie like this. However, you have to believe that the technology of the time would have made making a sequence like this damn near impossible. 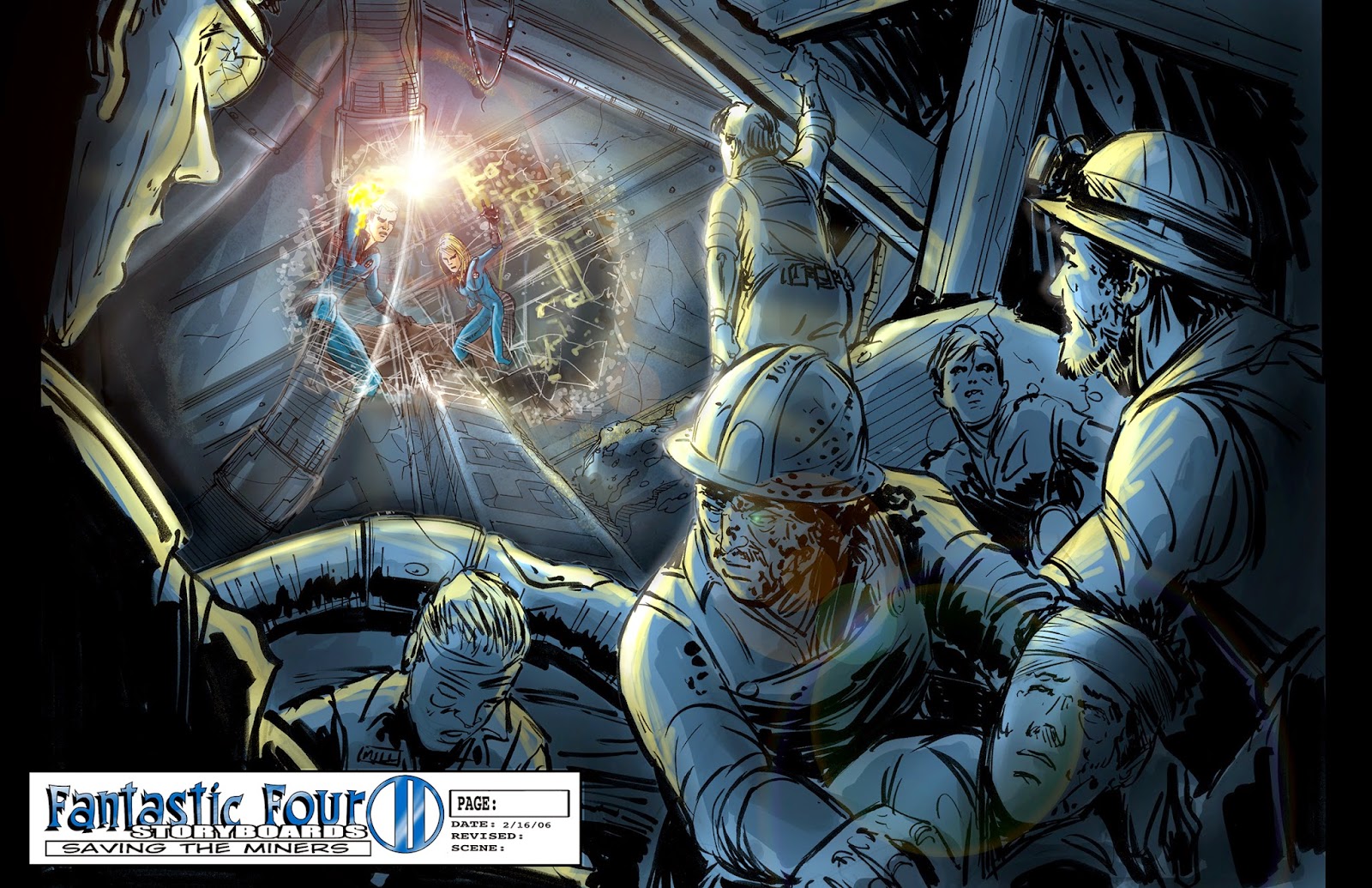 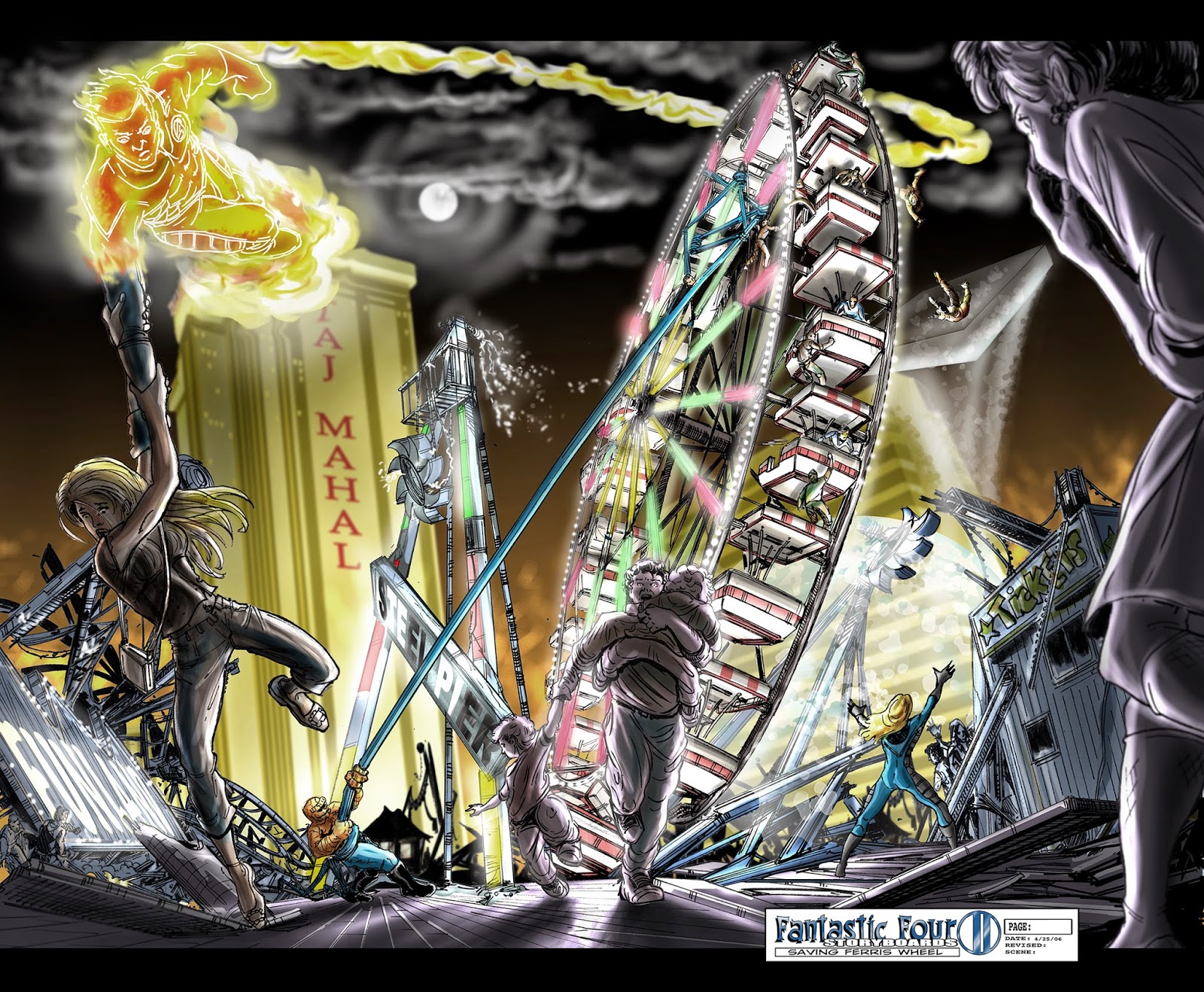 Just seeing these heroes being heroes is great and these smaller scale saves is something the reboot definitely needs to focus on as Marvel’s First Family doesn’t just save the universe…they save regular people as well. 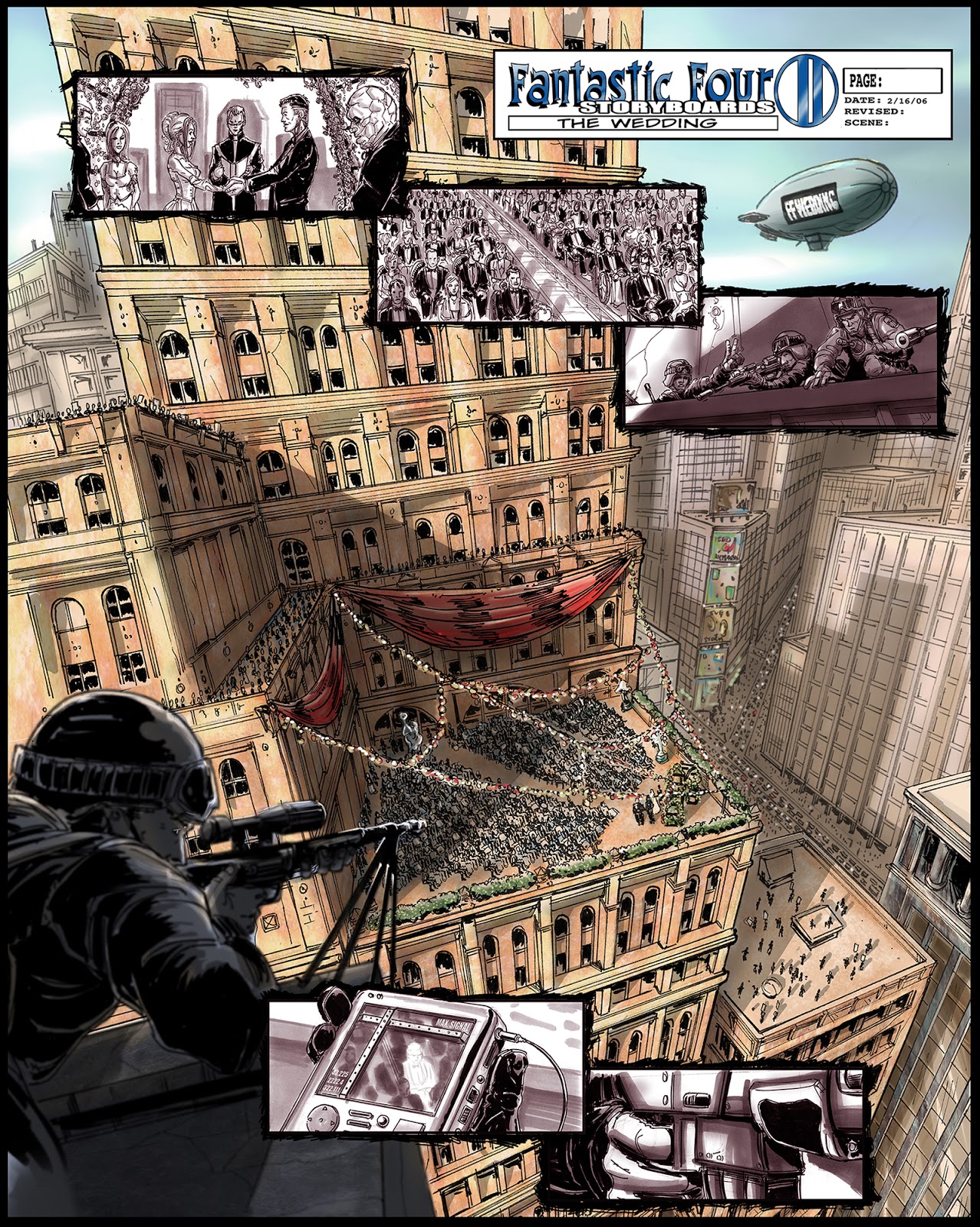 “I was hired on to [the movie] long before the script was ready, to work help director Tim Story brainstorm set piece ideas.  One element that was definitively going to present in the movie was the marriage of Reed Richards to Sue Storm…and the epic chaos created by the introduction of Silver Surfer in the middle of it,” Denlinger says. 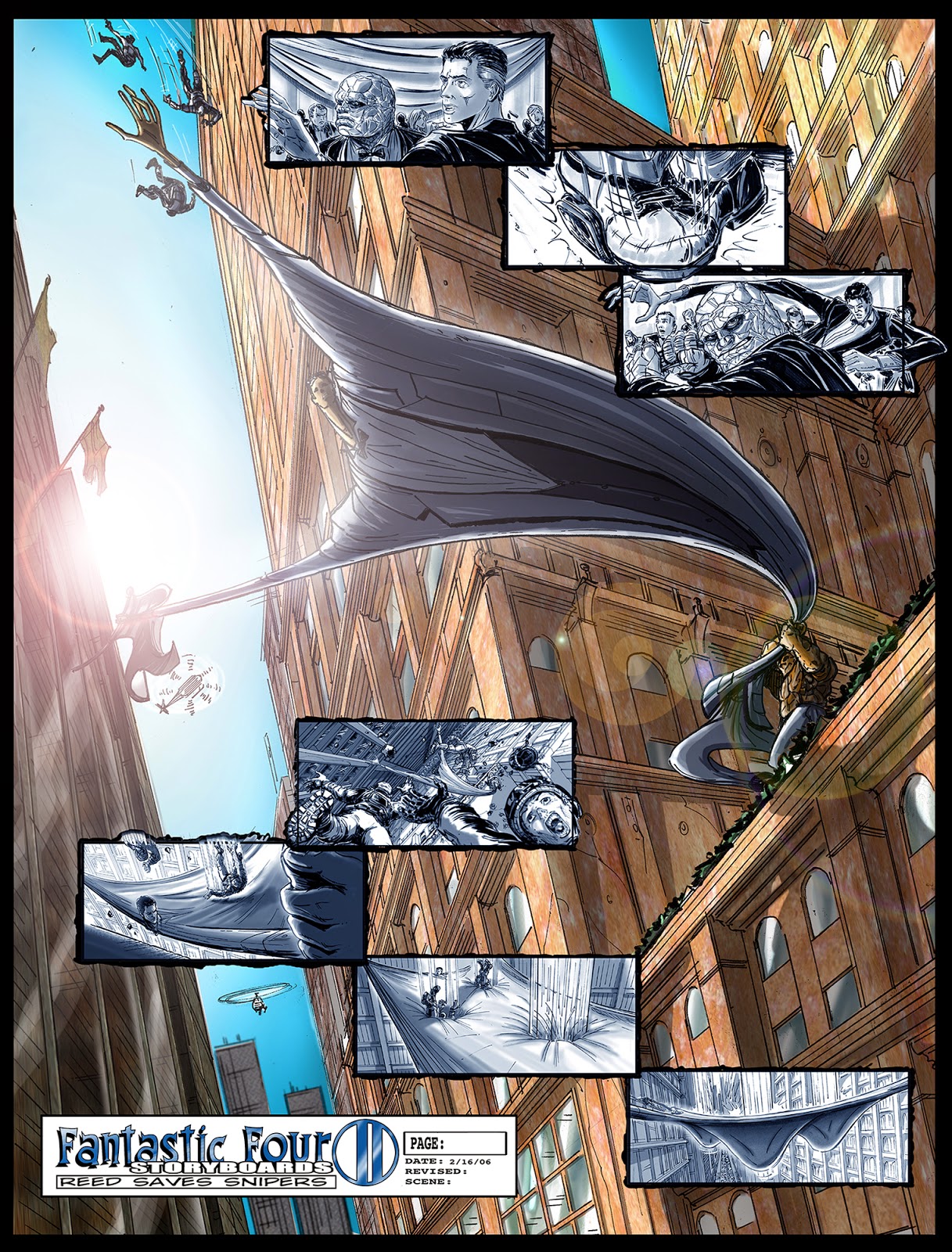 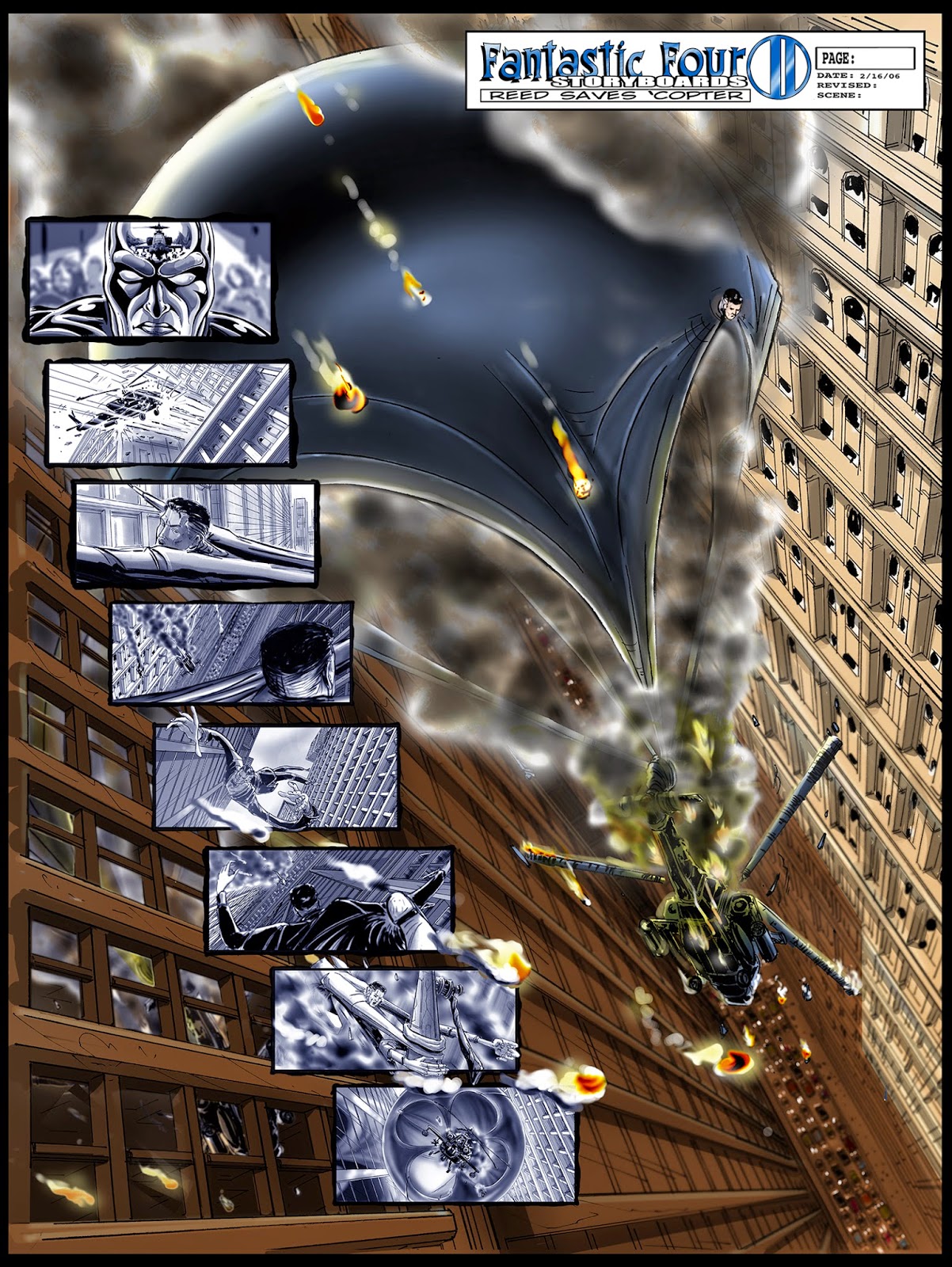 “To help sell 20th Century Fox on this huge set piece, I thought it would be cool to do them as a hybrid comic book splash page/concept illustration style,” he continues. “Ultimately, this sequence proved a bit ambitious for the budget and was cut down quite a bit in the final film.” 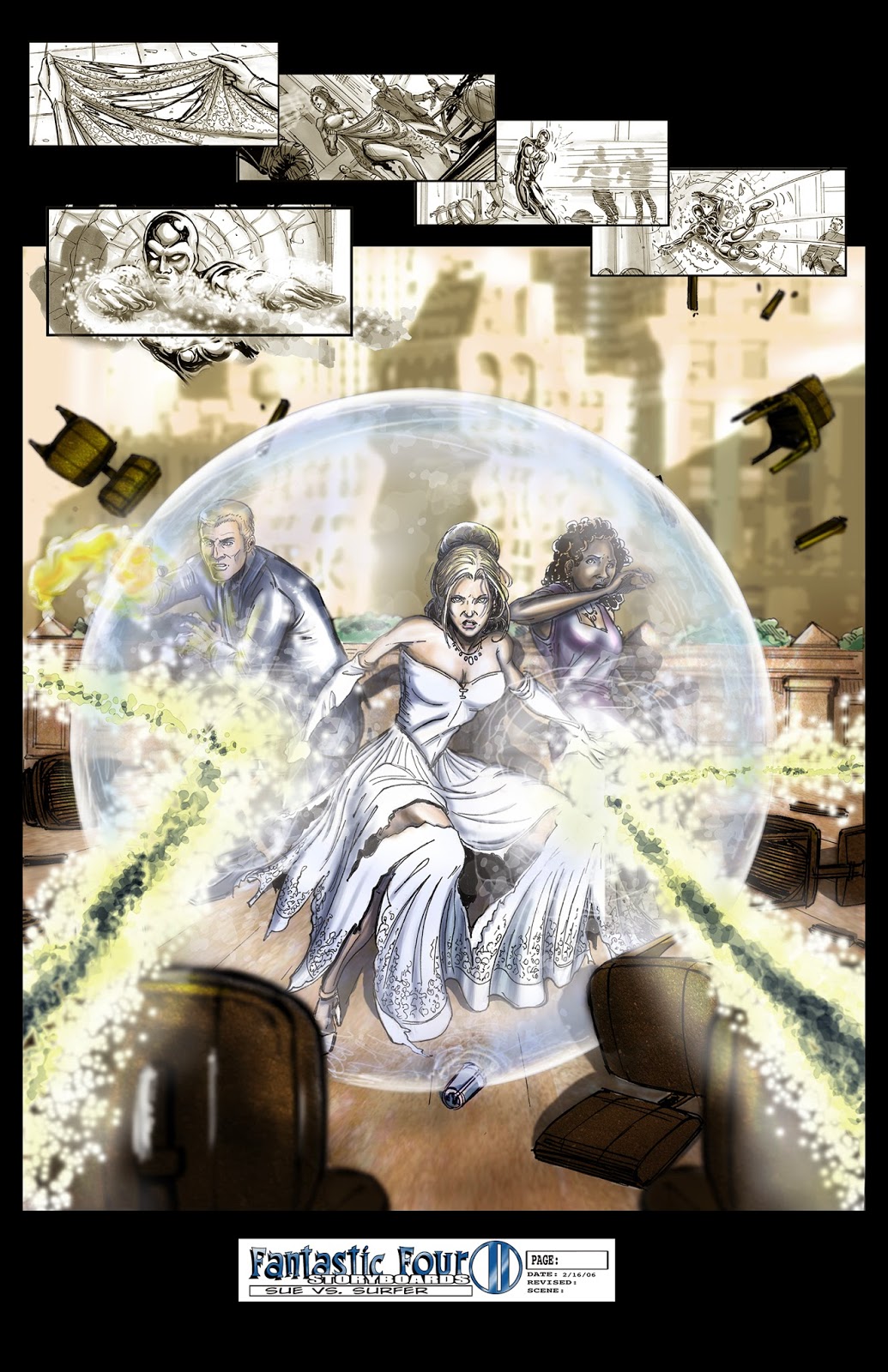 It seems budgetary issues plagued Rise of the Silver Surfer from the start and that’s a real shame because a moment like this would have been phenomenal to see on the big screen. 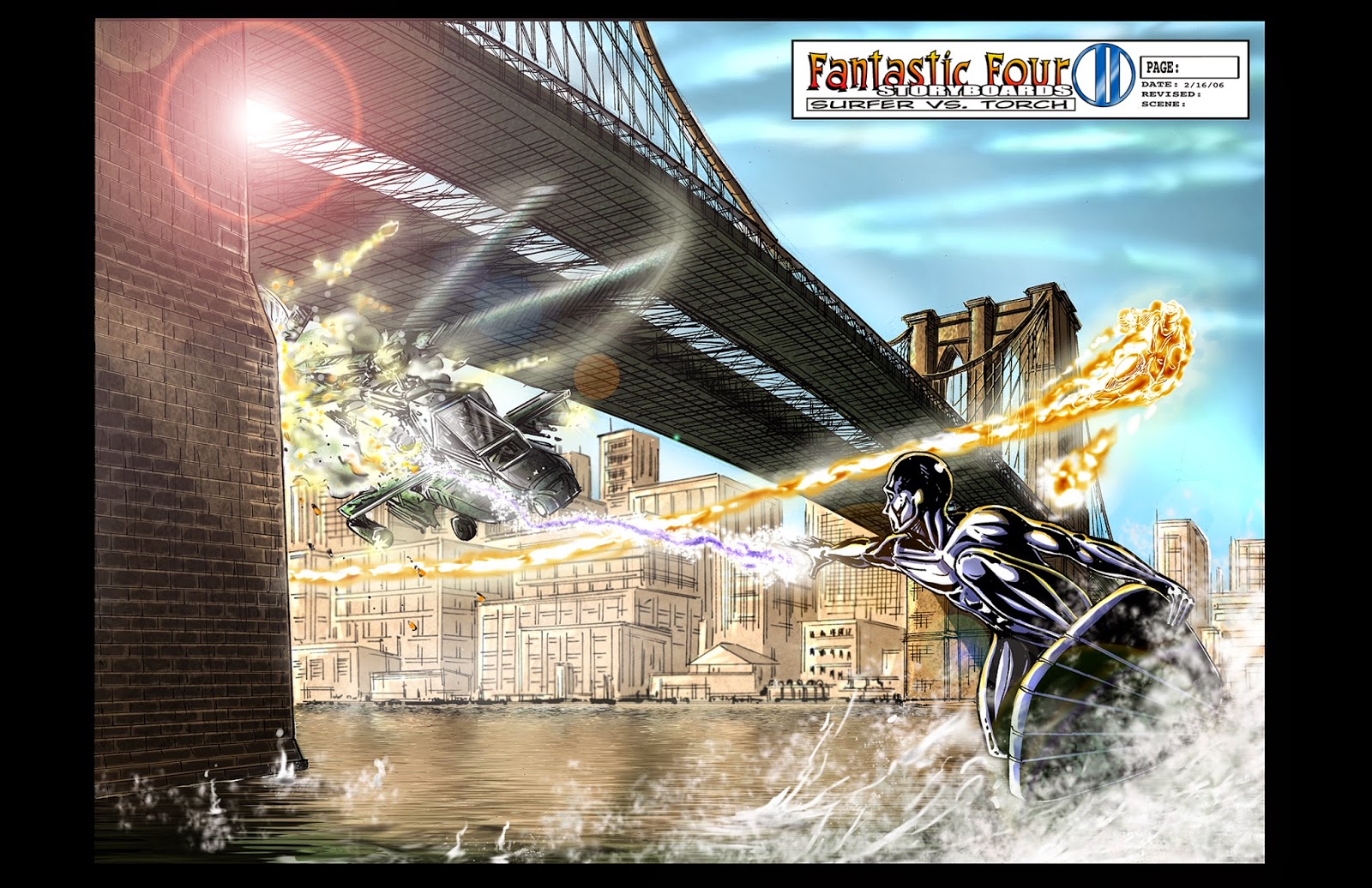 “The final piece of the wedding sequence was always going to be Johnny Storm chasing down the enigmatic Silver Surfer.  It was such an iconic idea and easily the most fun I had on the movie,” the artist continues. 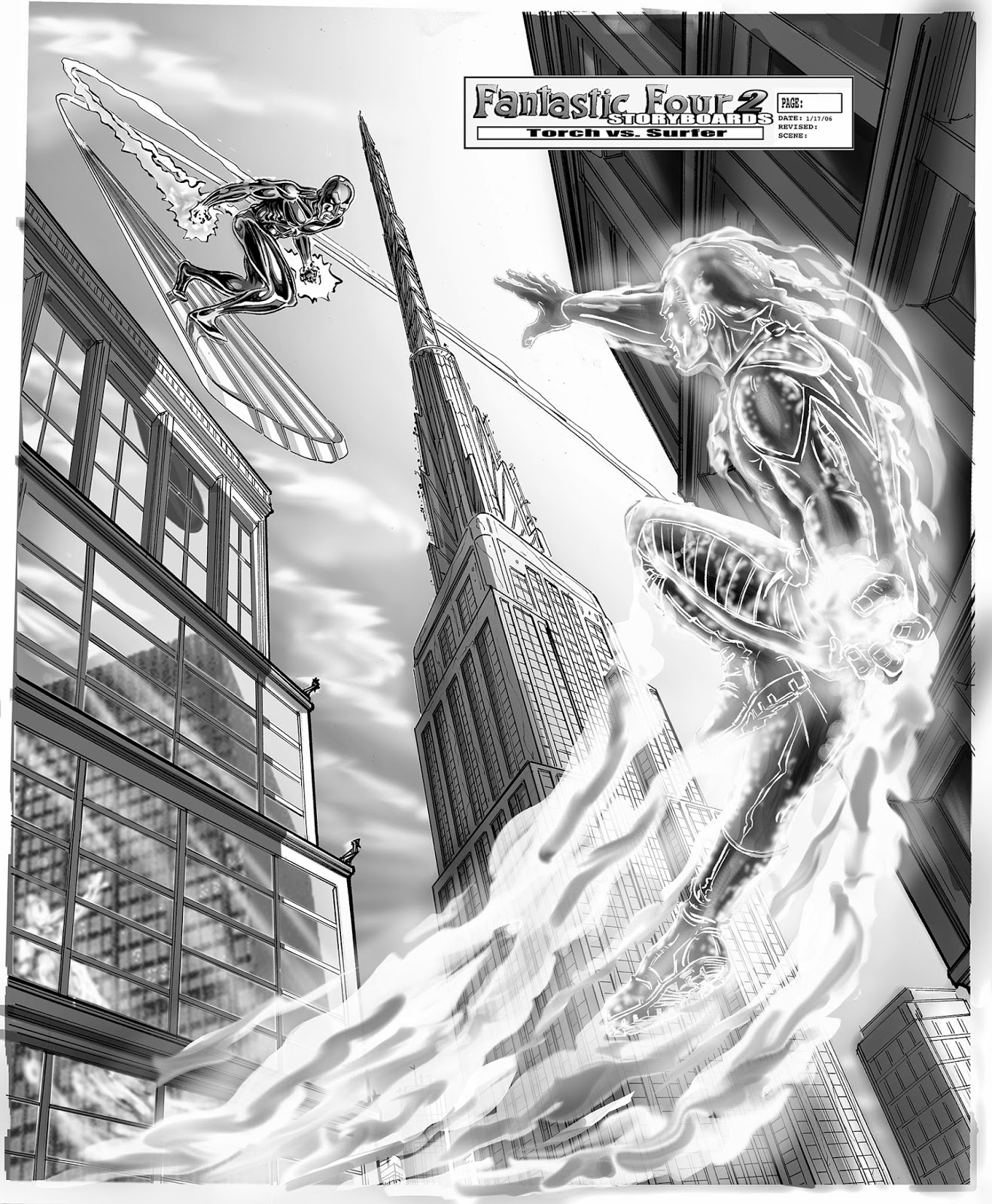 “The image of the Surfer carrying Torch in the low oxygen stratosphere was directly inspired by an amazing Silver Surfer illustration done by the legendary Adi Grandov,” Deringer concludes, referencing the legendary Iron Man concept artist. 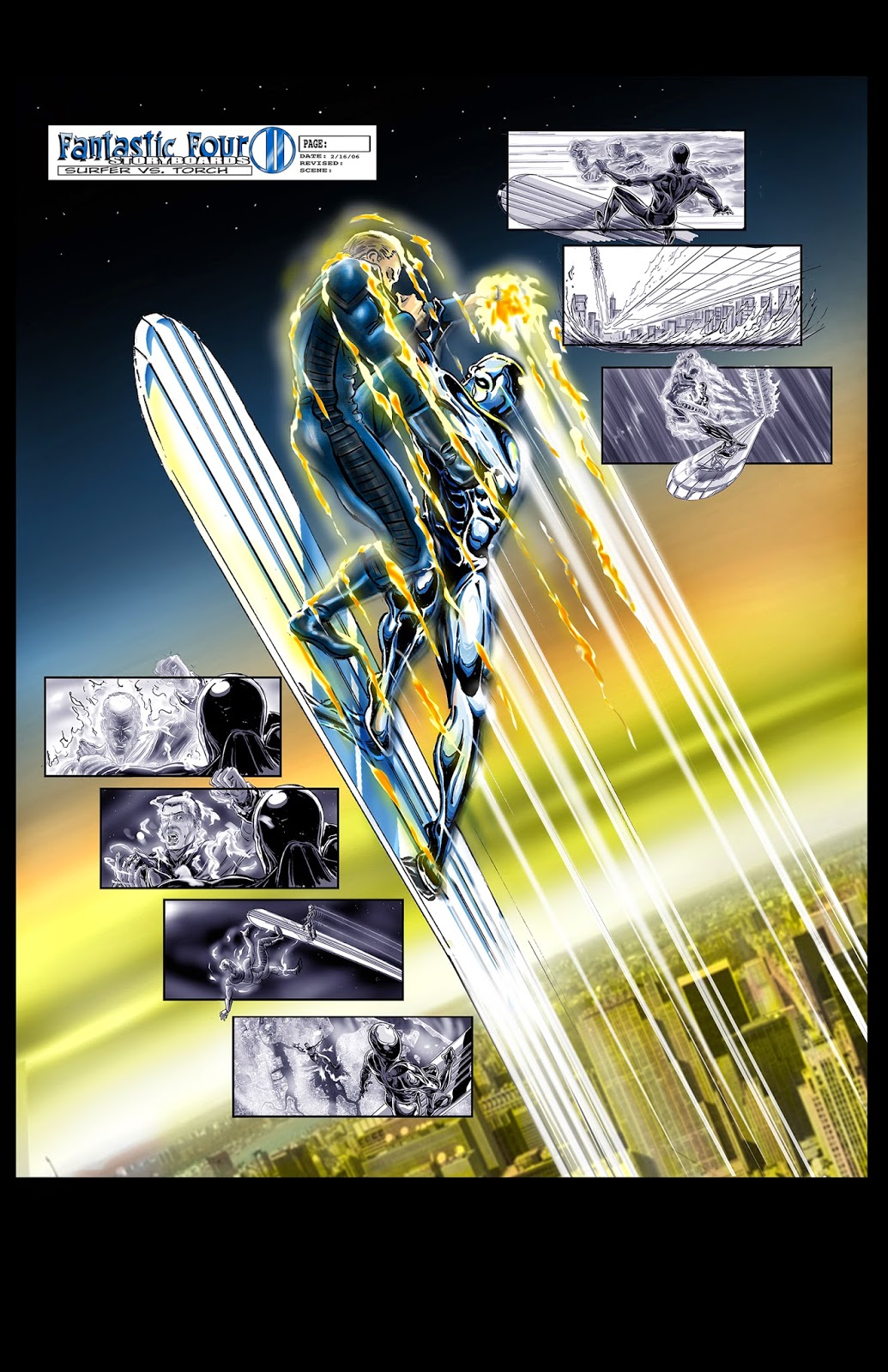 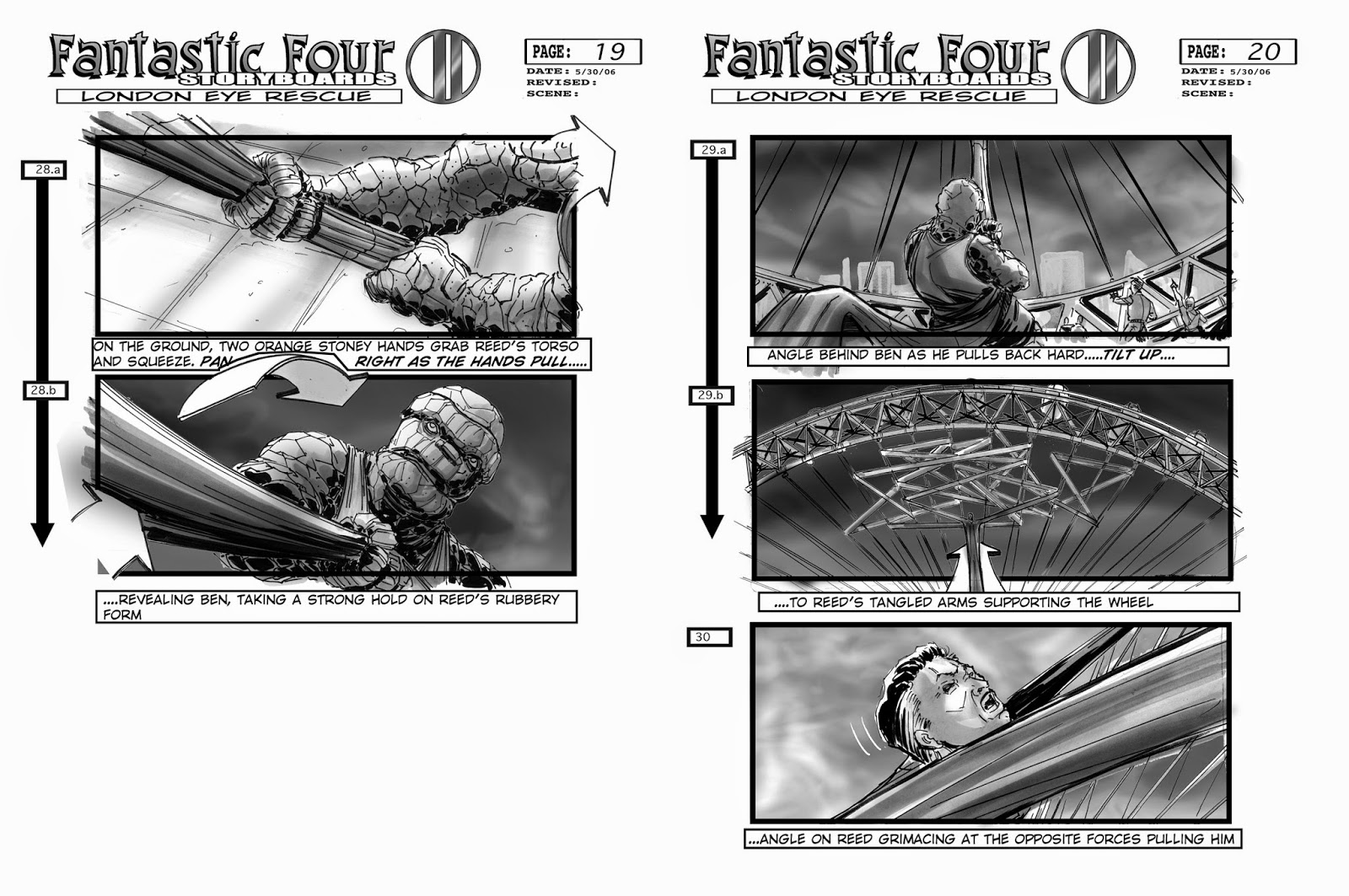 “Ultimately, Tim Story settled on the giant London Eye ferris wheel as a great location for an FF rescue effort. These are a few pages of storyboards I did in the development of the sequence,” he says of this memorable sequence from the movie.

“These final boards were taken from an animatic I did for the film, showing a comedic take on just what a marital tiff would look like in the Richards’ household.” Moments like these would have definitely helped improve this follow-up but an argument could be made that there was already too much comedy.

Many thanks to James Carson, Tim Flattery, Daniel J. Cox, and Darrin Denlinger for the concept art used throughout this post!
Categories
Recent Posts