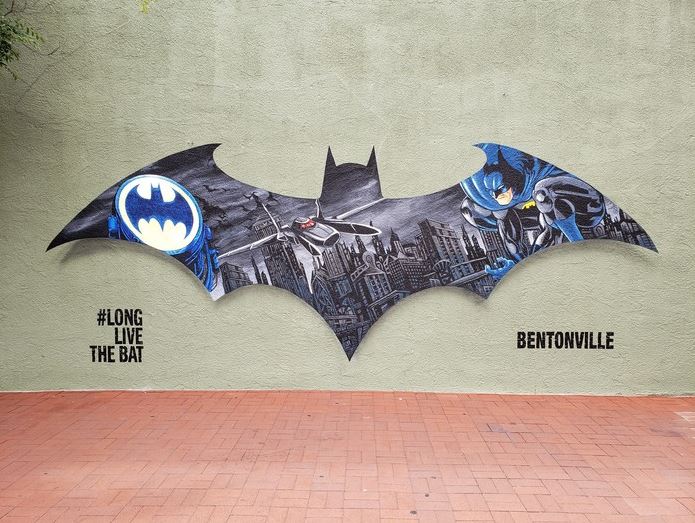 Heading into the summer celebrations of Batman 80th, DC is bringing fans a series of murals inspired by The World’s Greatest Detective in four cities across the country. The first mural was unveiled last week in Seattle at the city’s landmark music venue, The Crocodile. Painted by locally celebrated artist, Joey Nix, the 10-foot painting is currently on display for fans to visit through the end of June. Batman also appeared in a life-size mural that was revealed today in Bentonville at 116 E. Central Ave. by local muralist, Octavio Logo. Additional installations from a collection of local artists will also debut in Dallas and at the Warner Bros. Studios lot in Burbank later this summer.

Featuring locally-inspired iterations of the iconic Bat symbol, fans can visit the Instagrammable murals and pose in front of giant Bat wings to celebrate Batman in their city and share photos on social media with the hashtag, #LongLiveTheBat. Local artists in the various cities will pay homage to Batman’s 80-year legacy in pop culture through the immersive murals. 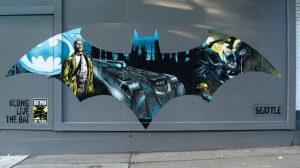 One of Seattle’s most prominent muralists, Joey Nix is behind the Emerald City’s newest tribute to the Dark Knight. Known for his photorealistic style in portraits of local heroes, Nix focuses on emotional realism by highlighting personal stories and revealing the inner truths of his subjects. As a longtime advocate for the Seattle graffiti art and mural scene, Nix has also curated an alley beautification program in the local neighborhood of Belltown, featuring artwork by well-known muralists from around the world. 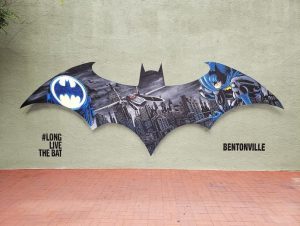 Acclaimed Mexican artist, Octavio Logo brings his signature dramatic style to the Batman mural in Bentonville, mixing vivid colors with bold designs. Growing up in Mexico City, Logo is known for combining his cultural experiences in Mexico and the U.S. through street art, using elements of magical realism and incorporating social commentary into his work. Logo has been contributing to the Bentonville street art scene since 2012, where he actively participates in public murals, local art exhibits, galleries and more.